By David MacKay
Special to CNN

Editor's note: David MacKay is a professor of physics at the University of Cambridge. His book, "Sustainable Energy - Without the Hot Air," is published by UIT Cambridge and is also available in electronic form for free from http://www.withouthotair.com/. 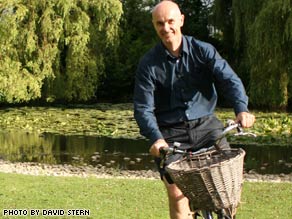 David MacKay says people engage in wishful thinking about energy because they don't look at the math.

(CNN) -- We need to introduce simple arithmetic into our discussions of energy.

We need to understand how much energy our chosen lifestyles consume, we need to decide where we want that energy to come from, and we need to get on with building energy systems of sufficient size to match our desired consumption.

Our failure to talk straight about the numbers is allowing people to persist in wishful thinking, inspired by inane sayings such as "every little bit helps."

Assuming we are serious about getting off fossil fuels, the scale of building required should not be underestimated. Small actions alone will not deliver a solution.

Let's express energy consumption and energy production using simple personal units, namely kilowatt-hours. One kilowatt-hour (kWh) is the energy used by leaving a 40-watt bulb on for 24 hours. The chemical energy in the food we eat to stay alive amounts to about 3 kWh per day. Taking one hot bath uses about 5 kWh of heat. Driving an average European car 100 kilometers (roughly 62 miles) uses 80 kWh of fuel. With a few of these numbers in mind, we can start to evaluate some of the recommendations that people make about energy.

Take, for example, the idea that one of the top 10 things you should do to make a difference to your energy consumption is to unplug your cell-phone charger when you are not using it. The truth is that leaving a phone charger plugged in uses about 0.01 kWh per day, 1/100th of the power consumed by a lightbulb.

This means that switching the phone charger off for a whole day saves the same energy as is used in driving an average car for one second. Switching off phone chargers is like bailing the Titanic with a teaspoon. I'm not saying you shouldn't unplug it, but please realize, when you do so, what a tiny fraction it is of your total energy footprint.

In total, the European lifestyle uses 125 kWh per day per person for transport, heating, manufacturing, and electricity. That's equivalent to every person having 125 light bulbs switched on all the time. The average American uses 250 kWh per day: 250 light bulbs.

And most of this energy today comes from fossil fuels. What are our post-fossil-fuel options?

Among the energy-saving options, two promising technology switches are the electrification of transportation (electric vehicles can be about four times as energy-efficient as standard fossil-fuel vehicles) and the use of electric-powered heat pumps to deliver winter heating and hot water (heat pumps can be four times as energy-efficient as standard heaters).

Among all the energy-supply technologies, the three with the biggest potential today are solar power, wind power and nuclear power.

As a thought-experiment, let's imagine that technology switches and lifestyle changes manage to halve American energy consumption to 125 kWh per day per person. How big would the solar, wind and nuclear facilities need to be to supply this halved consumption? For simplicity, let's imagine getting one-third of the energy supply from each.

To supply 42 kWh per day per person from solar power requires roughly 80 square meters per person of solar panels.

To deliver 42 kWh per day per person from wind for everyone in the United States would require wind farms with a total area roughly equal to the area of California, a 200-fold increase in United States wind power.

To get 42 kWh per day per person from nuclear power would require 525 one-gigawatt nuclear power stations, a roughly five-fold increase over today's levels.

I hope these numbers convey the scale of action required to put in place a sustainable energy solution. What about tidal power? What about wave power? What about geothermal energy, biofuels or hydroelectricity? In a short article, I can't discuss all the technology options.

But the sober message about wind and solar applies to all renewables: All renewables, much as I love them, deliver only a small power per unit area, so if we want renewable facilities to supply power on a scale at all comparable to our consumption, those facilities must be big.

If you don't want to build 1 million wind turbines, you can drill 1 million geothermal boreholes instead.

Before I close, I would like to say a few words about the idea that "the hydrogen economy" can magically solve our energy problems. The truth is that, in energy terms, today's hydrogen-powered vehicles don't help at all. Most prototype hydrogen-powered vehicles use more energy than the fossil-fuel vehicles they replace. The BMW Hydrogen 7, for example, uses 254 kWh per 100 km, but the average fossil car in Europe uses 80 kWh per 100 km.

In contrast, electric vehicles use far less energy: as little as 20 kWh per 100 km, or even 6 kWh per 100 km. The problem with hydrogen is that both the creation and the use of hydrogen are energy-inefficient steps. Adopting hydrogen as a transport fuel would increase our energy demand. And, as I hope the numbers above have shown, supplying energy to match our demand is not going to be easy.

The public discussion of energy options tends to be emotional, polarized, mistrustful and destructive. I hope that focusing attention on the numbers may make it possible to develop honest and constructive conversations about energy.

It's not going to be easy to make a energy plan that adds up, but it is possible. We need to get building.

The opinions expressed in this commentary are solely those of David MacKay.