Endangered right whales appear to be on the rebound

(CNN) -- North Atlantic right whales, sort of the homely underdogs of the whale world, birthed a record number calves this year off the coast of the southeast United States, giving some scientists hope that the uber-rare and often overlooked species can recover. 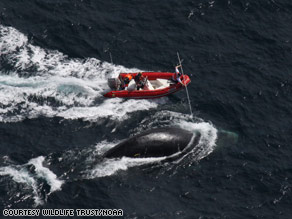 Researchers try to free a right whale from fishing rope. Five whales have been helped this year.

"For me, personally, it is a source of optimism," said Barb Zoodsma, a marine mammal biologist with the National Oceanic and Atmospheric Administration. "I just think we're on the right track."

The record 39 new calves -- each of which weights about 3,000 pounds -- were born off the Atlantic coast of Florida and Georgia.

The calving season for the school-bus-sized species formally ended March 31, and the whales are now headed north along the East Coast of the United States.

Only about 400 of the marine mammals are thought to exist, making right whales one of the most endangered large whale species in the world.

Herds of volunteers and scientists track the whales from planes, from the shore and from boats. They identify them by unsightly warty patterns on their heads, called callosities.

Meet the volunteers and scientists in a CNN interactive »

Through these surveys, researchers know that the number of right whale births per year generally has been increasing since 2001. That year, 31 of the whales were born, which was then the record for the number of calves birthed in a single year.

Still, the species population is incredibly small and faces a number of threats, Zoodsma said. The whales have to make it to age 5 to 7 before they too can give birth and continue the species' gradual rebound.

Hear Zoodsma talk about her favorite whales, including Stumpy and Van Halen »

The young whales will face several threats from humans before they reach that age. The right whale has a long and troubled history of interactions with people.

The species' name comes from the fact that it was considered the "right whale" to kill during the whaling era. It harbors thick layers of valuable blubber beneath its skin, and the whales are so chunky that they float quickly to the surface after they're harpooned.

Now, the whales migrate through a channel of ocean that's heavily trafficked by cargo and fishing ships, earning the species a new nickname: the urban whale. Ships are known to strike right whales, partly because the black creatures are difficult to spot on the water.

Others become entangled in fishing rope, a particularly grotesque phenomenon since the thick ropes can rub through a whale's skin and hit bone.

Five whales were found entangled in fishing gear this year in the southeast Atlantic -- another record, but one that tempers the scientists' optimism.

"Right whales, for the first time in a long time, are doing their part: They're having the babies; they're having record numbers of babies," said Monica Zani, an assistant scientist at the New England Aquarium who works with right whales. "We need to be vigilant and still do our part" to prevent the whales from being killed.

This year, scientists employed a new tool to help free one whale.

In mid-March, researchers from several government agencies used a tranquilizer to sedate one of the entangled whales, named Bridle because the whale had rope tangled around its face and cutting through its head.

It was the first time researchers had successfully sedated a large whale of any type, according to NOAA. To do so, they had to use two cups worth of tranquilizer and a foot-long needle. Two drops of the concoction would be enough to kill a person, said Jamison Smith, NOAA's large whale disentanglement coordinator.

Previously, when scientists had tried to sedate whales, nothing noticeable happened, he said.

Even thought Bridle was set free from most of the problem rope, the whale may not survive, Zoodsma said.

"This rope was embedded several inches into this animal's flesh," she said, adding, "we certainly gave it its best opportunity to survive. ... When you see this animal, it's very clear we need to prevent that stuff from happening."

Although this year's calving season set records, it may not be enough to say the species will recover.

Kate Longley, who works on a team with the Provincetown Center for Coastal Studies to monitor right whales in Cape Cod Bay, said, "there hasn't been much indication that the species is rebounding significantly."

"It's definitely good news, and it's the most that we've seen, but it's only one year," she of the 39 births. "So I think it would be premature to make any sort of prediction or any sort of statement about the state of the species based on one year of high calving."

Other scientists put more weight on the news.

Zani, of the New England Aquarium, called the record number of calves "fantastic."

"We blew [the previous record] out of the water," she said, adding that she is "cautiously optimistic" about the species' chances for recovery.

"Hopefully, these numbers will remain high. Hopefully, the next 10 years, you'll just slowly start to see this whole other generation of these reproductive females reaching sexual maturity," she said. "The hard thing is, you have to keep them alive."