By Olivia Feld
For CNN

LONDON, England (CNN) -- British authorities and environmental groups were welcoming the launch this week of the world's first biodegradable chewing gum, which they say could help save some of the millions spent on clearing up the mess ordinary gum creates. 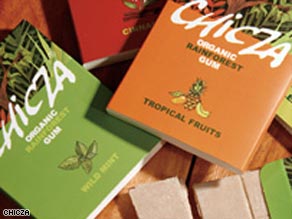 The makers of Chicza say it is the first biodegradable chewing gum ever sold. Environmental and waste management groups told CNN that they, too, believe it is a first.

Unlike other gums that contain petrochemicals the natural gum is produced from the sap of the chicozapote tree found in the Mexican rainforest, a spokesman for Chicza told CNN.

A spokesman for campaign group Keep Britain Tidy told CNN they welcome any product that can help eradicate the staining on pavements caused by dropped chewing gum.

Sixty-five percent of British streets have chewing gum stuck on them, a spokesman from Keep Britain Tidy told CNN.

One of the worst-affected areas is Westminster in central London, where a comprehensive gum clean-up would cost £9 million ($13.4 million), according to Westminster City Council.

"Gum litter is a constant problem for us, especially given the vast number of visitors to Westminster every day. We spend £100,000 ($148,000) a year cleaning ugly blobs of conventional chewing gum off our streets," Westminster City Councilor Danny Chalkley said in a written statement.

"It's an incredibly expensive and time-consuming task, so anything that could reduce the problem is very welcome indeed." he said.

British parliamentarians have called on the government to introduce a tax on chewing gum, with the money raised going toward the cost of gum removal.

In Britain, offenders can be fined up to £80 ($119) for discarding used chewing gum on a street.

The producer of the new gum is Consorcio Chiclero, which comprises 46 cooperatives with around 2,000 chicleros farmers, working in an area of 1.3 million hectares of rainforest, according to a statement from Chicza.

Locals have been extracting the natural chicle gum base from the bark of the chicozapote trees for a century, a spokesman for Chicza told CNN.

After years of exporting the gum base to be used as an ingredient in the manufacture of regular chewing gum, the cooperative recently decided to start making its own gum using only chicle gum base and natural flavorings and sweeteners, Chicza said.

The company launched its gum in Britain this week. It is available at a chain of supermarkets and Mexican restaurants.