FLAGLER BEACH, Florida (CNN) -- Glenn Wood and several other retirees lean on a wood rail on the second story balcony of the Golden Lion Café -- a beachside pub and restaurant in northern Florida. 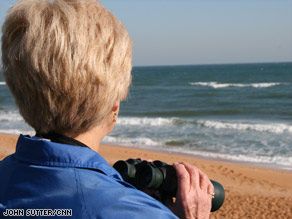 Glenn Wood, 68, has been searching for right whales for five years as a volunteer.

It's 8 a.m., so no one's here for French fries or beer-battered fish. As the group gazes out into the ocean sunrise, they're scanning for North Atlantic right whales.

Wearing whale earrings, a flipper necklace and a blue windbreaker that says "Whale Watch Survey Team" on the back, Wood says she's been coming to this spot -- the highest lookout point in the area -- to search for whales once a week for at least five years.

Each new calf the group spots gives her hope that the right whale -- a highly endangered and often-overlooked species -- will recover.

"Slowly, slowly they must be growing" in numbers, said Wood, 68. "I do feel like we're helping this. We're hopeful."

And for once, scientists say they share Wood's optimism.

At least 32 new right whale calves -- more than ever recorded -- have been observed this season off the coasts of Georgia and Florida, where the whales migrate to give birth between late November and March. Only about 400 members of the species exist, and the massive mammal is thought to be the most endangered of all the large whales.

Each birth is seen as a miracle of sorts -- a potential key to the survival of a species that has been through many tough years.

Right whales were named by their hunters who once said they were the "right whale" to kill. When they were harpooned, the chubby whales floated to the surface of the water. That made them both profitable and easy to hunt.

The whales -- which can grow to 70 tons, or the weight of more than a dozen elephants -- are difficult to spot in the water because of their jet-black appearance and lack of dorsal fins.

That has made them susceptible to humans in another way: They're often hit by ships.

Usually, one or two right whales are killed each year by collisions with ships. No deaths from ship collisions have been recorded so far this calving season.

The whale's followers say a new rule that requires large ships to slow down to 10 knots as they cruise through the whales' habitat seems to be helping. So does a large network of eyes -- like Wood's -- that scan for the school-bus size whales and alert ship captains, cruise lines, airplanes, Navy submarines and others to the whales' whereabouts.

Every morning during calving season, volunteers armed with binoculars and whale-related handouts troll up and down the Florida coast -- climbing to balconies and zipping up elevators to the top floors of high-rise condos and retirement communities -- to look for whales.

Above them and to the north, small planes filled with scientists mow neat grid lines over the Atlantic. When they spot a whale, they circle at 1,000 feet and hang out an open window to shoot photos with a long-range zoom lens.

Researchers in rubber boats use crossbows to dart the newborn whales and take tissue samples for clues about the species' genetic makeup and individual family trees.

Meet the scientists and volunteers who protect the whales »

Since 1980, the New England Aquarium has used photos of the distinctive patterns on the whales' heads -- along with their scars from collisions with ships -- to identify the whales and assemble their family trees. Each whale is assigned a four-digit number in a catalogue, and many have names.

Drawings of all this season's new moms are tacked to an upstairs wall in the New England Aquarium's ocean-side research house in Fernandina Beach, Florida, up the coast from Jacksonville. Workers know the moms and their stories the same way FBI agents memorize the faces of their most-wanted suspects.

Off the top of her head, assistant scientist Monica Zani can tell you that a whale named Baldy, her calf, No. 1503, and 1503's calf, Boomerang, all gave birth this season.

From a computer in front of the wall of whales, Zani collects sighting locations and sends out e-mails, text messages and pager alerts with the subject line "WHALE ALERT." The messages give out the exact coordinates of the whales so ships won't hit them.

Another threat is on the horizon, though.

Further north, some whales have become entangled in fishing ropes and lobster traps. Such entanglements are frequently fatal. The ropes restrict the whales' movements and dig into their skin, causing deep wounds and infections.

There have been efforts to change some fishing equipment to protect the whales, but researchers say they've already seen five entangled whales in the Southeast this year -- more than ever. Usually only one or two whales are found entangled each winter, they said.

The entanglements make some scientists temper their hopes for the future of the species.

"Four hundred animals is not a vibrant, thriving population -- it's one that's very close to the edge," said Amy Knowlton, a research scientist at the New England Aquarium. "And so I think we need to keep monitoring what's happening from year to year, understand how they die, and really stay focused on the fact that this is a population that's not out of the woods by any means."

Barb Zoodsma, a right whale biologist with the National Oceanic and Atmospheric Administration, said the high number of births this year can be "nothing but good news."

Still, she said, the entanglement trend is troubling.

"The fate of this species can turn on a dime, so we need to ride the wave of good news right now, but we also need to remain vigilant for threats that are on the horizon," Zoodsma said.

Katie Jackson, a marine mammal biologist with the Florida Fish and Wildlife Conservation Commission, is part of a team that tries to disentangle these whales before their wounds become fatal.

Riding in a small, inflatable boat, the scientists toss grappling hooks at the fishing ropes that ensnare the whales. Once they grab hold, they throw jackknives at the ropes to try to cut the whales loose.

It's dangerous work and the whales often swim away as fast as they can. Of the five entangled whales spotted this season, scientists have only been able to free three, Jackson said.

One of the failed attempts was directed at whale No. 3311, named Bridle because it has a rope stuck through its mouth like a bridled horse. If Bridle isn't disentangled, he likely will die, Jackson said.

But for the moment, right whale enthusiasts seem focused on the species' apparent rebound.

Wood, the whale watcher, said many Florida residents are unaware of the school-bus sized creatures just off the shore.

"In this area people are always amazed that Florida has whales at all, so we try to educate the populace," she said. "When people drive by and see people with binoculars looking at the ocean they do wonder what we're doing."

The more people know about the whales, the more they'll be inclined to protect them, she said.

But Wood loves the whales and their stories even if, as she says, they're "not cute."

She thrives on the excitement of helping an underdog species recover.