Spotting endangered whales from the skies 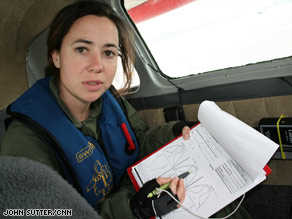 Jessica Taylor calls in right whale sightings to prevent the rare whales from being hit by ships.

The mouse is taped to the wall next to the window. The laptop is strapped to the floor at her feet. Want to make a call? Just punch the button shoved behind the armrest.

All of her strangely placed gadgets allow her one important freedom: She never has to look away from the window. That's important because her job is to scan the Atlantic Ocean for North Atlantic right whales, which are critically endangered. Her workspace is the cramped back seat of a four-person plane.

Taylor, of the New England Aquarium, is part of a huge network of people who are looking out for the right whale as females of the species give birth off the coast of southern Georgia and northern Florida from now until the end of March.

How to identify a right whale »

As she scans the Atlantic waters, she's searching for good news: mom-and-calf pairs that will help the whale population rebound. Only about 400 of the whales are known to be alive today.

Here's how she goes about that task:

When she spots a whale from 1,000 feet in the air, Taylor clicks the mouse that's taped to the cabin wall. Without looking away, she then punches a button to activate a satellite phone and calls in the whale's coordinates to a worker on the ground. Ship and plane captains all over the area get word of the whale location in near-real time through e-mail alerts, text messages, faxes and pager messages.

Ships are one of the biggest threats to right whales, which are slow swimmers and hang out near the surface of the water, where they're susceptible to being hit. Researchers hope the alerts that Taylor and others help put out will reduce the amount of whales that are hit and killed by boats.

The whales are jet-black in color and have no shark-like dorsal fin. That makes spotting them difficult -- both for ship captains and for Taylor.

The news from the skies isn't always good.

On a recent flyover, Taylor and fellow observer Zach Swaim photographed a new mother, No. 2660, who's named Gannet because she has a bird-like pattern on her head. Gannet was without her newborn calf, and observers fear the calf is dead.

As Taylor pressed her face against the four-seat plane's window to get a better look, she saw a small fishing boat headed straight for Gannet. The scientists radioed the boat from the air, but the fisherman appeared not to hear them. Suddenly, for no apparent reason, he dropped anchor and avoided a collision.

One crisis was averted. But the researchers have to take the work one day at a time -- never giving up hope that their efforts will keep this rare species from plummeting into extinction.

All About Endangered Species • Nature and the Environment • Atlantic Ocean