The debate between evolution and creationism still rages in some places

(CNN) -- Before there was an extensive fossil record, DNA sequencing or even a basic understanding of genetics, there was Charles Darwin. 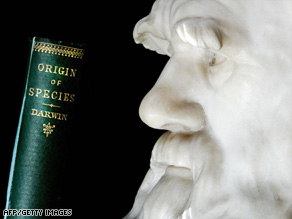 Naturalist Charles Darwin, the father of evolution, was born 200 years ago today.

Today, the world commemorates the 200th birthday of a man who single-handedly revolutionized biology with an explosive theory that challenged the core of our existence.

"Darwin wrote about who we are," said historian and author James Moore, who has cowritten a new book on the famous evolutionist. "He gave us a re-interpretation of the history of humans on earth, and what we can become."

Darwin's theory of evolution proposes that humans evolved over millions of years from animal species, specifically apes. Such thinking, which challenged the biblical account that a deity created the Earth in six days, was considered radical, even blasphemous, when Darwin published it in 1859.

A century and a half later, the legacy of history's most noted naturalist continues to make headlines.

After a contentious debate, the Texas Board of Education is set to vote in March on how evolution should be taught in the state's public schools. Last week, actor-comedian Ben Stein backed out of giving a commencement speech at the University of Vermont because of student complaints about his views challenging evolutionary theory.

This follows an earlier Gallup poll on the issue, conducted last May, that found only 14 percent of Americans believe that humans developed over millions of years from less advanced forms of life. Forty-four percent believe that God created human beings almost overnight within the past 10,000 years, and another 36 percent believe that God guided humans' evolution from animals over a much longer period of time.

"The problem is, there are a number of fundamental people on both the left and the right extremes," said Michael Zimmerman, founder of the Clergy Letter Project, which seeks to find common ground between scientists and the clergy.

"Most people think you can't believe in evolution and have faith," added Zimmerman, a dean at Butler University in Indianapolis, Indiana. "Faith does not mean that you have to give up common sense. Faith is deeper than that."

Darwin devoted much of his adult life to questioning the unquestionable. Born February 12, 1809, in Shrewsbury, England, he earned a degree in theology from Cambridge University and was known for his obsession with collecting things, especially beetles.

His outlook on life changed after he embarked in 1831 on a five-year voyage around the world on the HMS Beagle, a British naval ship. His observations during the journey inspired Darwin to develop his theory of natural selection, the process by which organisms that are best adapted to their environment produce more offspring while those less suited eventually die out.

After spending 20 years meticulously crafting and weighing the implications of his theory, Darwin finally went public with his life's work. "On the Origin of Species," his landmark book about evolution and natural selection, was published in 1859.

Darwin was an unassuming scholar who wanted to make a humble contribution to the world of science, but his ideas on evolution were heresy to much of 19th-century England. The implication that our past, present and futures are all connected in an integrated web shook the biological, religious and political foundations of life as it was believed to be.

"The world was not the same after its publication," said Sean B. Carroll, a professor of molecular biology and genetics at the University of Wisconsin and author of a new book, "Remarkable Creatures: Epic Adventures in the Search for the Origin of Species."

Central to Darwin's thesis was his scientific explanation of life's diversity: that all life evolved from a common lineage through the process of natural selection. This egalitarian view was not popular with those who professed their anthropological superiority over people of other races.

"Darwin's theory challenged the notions of human exceptionalism and brought to light this idea that humans are a result of natural processes, meaning we were not as 'special' as [we] once thought," said Eugenie Scott, a physical anthropologist and the executive director of the National Center for Science Education.

Darwin shares a birth date with Abraham Lincoln, who sought to end slavery in the United States soon after "On the Origin of Species" was published. A major driving force behind Darwin's research was his own disdain for slavery, prejudice and human suffering.

"He had a deep regard for humanity and living entities," said Moore, who co-authored a new book, "Darwin's Sacred Cause," about the influence of slavery on Darwin's thinking. "There was no high or low, better or worse. Things were just different."

Some scientists say Darwin's theory doesn't account for all the biological diversity we see in nature.

"We don't have a clear pathway for how things evolved. Evolution inherently is a valid theory for some aspects of biology, but it doesn't explain everything," said Michael Egnor, a professor of neurosurgery at the State University of New York, Stony Brook.

Egnor is a supporter of the relatively recent theory of intelligent design, which holds that biological life was purposefully created by an intelligent being or deity and not an unguided process such as natural selection.

"There are certain features of the universe and of living things are best explained by an intelligent cause, not an undirected process such as natural selection," added Egnor, who is affiliated with the Discovery Institute, a politically conservative think tank.

But most of Darwin's theories are now accepted as a foundation of biological science.

"The evidence for evolution is overwhelming. We can see it all around us," said Carroll, the University of Wisconsin professor. "He teaches us that life is continually adapting to keep up with a changing Earth."

This continual fight for survival may resonate more loudly today than ever. In the 21st century, climate change is forcing species to evolve more quickly to survive on a warming planet, scientists say.

If drought conditions intensify and deforestation continues, many scientists expect to see great changes in the biological compositions of ecosystems over the coming decades.

In other words, Darwin's theory of natural selection is still very much in evidence.

"Changing ecological systems are causing intense environmental pressures on organisms," said Scott, of the National Center for Science Education. "We are seeing rapid species growth and waves of extinction all at the same time."

All About Charles Darwin • Evolution