(CNN) -- Mount Redoubt, the Alaskan volcano expected to erupt at any time, is getting a bit more edgy. 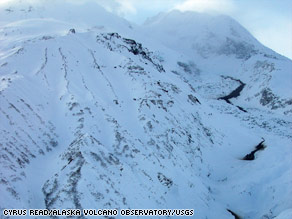 Dark areas show a mudflow from the peak of Mount Redoubt earlier this week.

The Alaska Volcano Observatory said in a statement Friday "volcanic tremor" has increased in "amplitude."

The activity on the 10,197-foot peak is "more energetic than that of the previous several days. However, it is still less vigorous than that observed last weekend," the observatory said.

Peter Cervelli, a research geophysicist with the observatory, told CNN that "every indication is that we're heading toward an eruption."

Cervelli said scientists don't know exactly when it will happen, but if it does happen, it could be days or weeks -- or even hours.

"I would not be surprised to see it erupt at anytime," Cervelli said. "We're going to know it when we see it."

Learn more about Redoubt and its history »

Scientists raised the alert status Sunday to a "watch" level, the second-highest, based on seismic activity detected January 23.

The peak is about 100 miles southwest of Anchorage, the state's most populous city.

Mount Redoubt last erupted nearly 20 years ago, in December 1989, and that eruption lasted until April 1990. Geologists think there could be an eruption "similar to or smaller than the one that occurred in 1989-90." PopSci.com: Predicting eruptions

That eruption spread ash in Kenai and Anchorage, where it disrupted air traffic operations. Cervelli said the ash plumes caused engine failure on a jet.

The 1989-90 eruption also spurred volcanic mudflows, or lahars, that flowed east down the Drift River. The ash fall was seen as far away as Fairbanks and the Yukon Territory border. PopSci.com: Prehistoric explosions wiped out ocean life -- and created petroleum

The observatory has set up a Web camera near the summit of the volcano and another within Cook Inlet. It plans to do continuous visual surveillance, measure gas output and analyze satellite and weather-radar data.

All About Alaska • Geology