(CNN) -- Archaeologists in Israel have discovered what they believe is the bust of a Roman boxer from the second or third century. 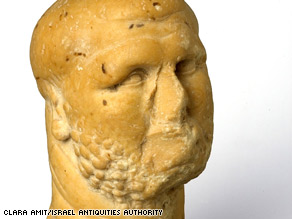 The figurine is small -- about 6 centimeters high by 4 centimeters wide -- but very detailed, archaeologists say.

"It seems that what we have here is a unique find," the two directors of the excavation said in a statement released Monday by the Israel Antiquities Authority.

The figurine, made of marble, comes from a time when "the art of Roman sculpture reached its zenith," Doron Ben-Ami and Yana Tchekhanovets said.

It's tiny -- only about 6 centimeters high by 4 centimeters wide, Ben-Ami told CNN. "That's why it is so impressive. It's so small, but still you can see every little detail on the marble," he said.

The archaeologists believe a merchant family from the eastern part of the Roman Empire most likely passed down the "precious object" through the generations until the fourth or fifth century, when an unfortunate family member had it with him at a public building, perhaps a hostel -- and an earthquake struck.

A team has been digging up the building in the City of David, part of Jerusalem.

The object is part of the "silent testimony of the drama that occurred in this impressive structure prior to its collapse," the Israel Antiquities Authority said.

The "short hair style, the prominent lobes and curves of the ears, as well as the almond-shaped eyes suggest that the object most likely portrays an athlete, probably a boxer," the statement said.

Little bits of the sculpture have broken off. It is missing part of the nose and mouth, Ben-Ami said.

"The high level of finish on the figurine is extraordinary," Ben-Ami and Tchekhanovets said in their statement.

They added: "To the best of our knowledge, to date no similar artifact made of marble (or any other kind of stone) bearing the same image that was just found has been discovered in excavations elsewhere in the country."

A few similar artifacts made of bronze have been found "at different sites in the country and they have been found in large numbers in different places throughout the Roman Empire, where the overwhelming majority of them date to the third century CE (the Roman period)."

Two tiny holes in the figurine suggest it was used as a suspended weight together with a balance scale, the archaeologists said.

Last month, the excavation team at this same site discovered "one of the largest and most impressive coin hoards ever found in Jerusalem," the Israel Antiquities Authority said. "It consists of 264 gold coins and was found at about the same time as a gold earring, inlaid with expensive pearls and remarkably well preserved."

"Every single object has a story behind it," Ben-Ami said in an interview with CNN. "Behind every object there are people. And, for us, the most important thing is to try to tell the stories behind these items."

All About Archaeology • Jerusalem