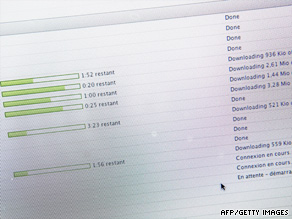 An MP3 music file gets downloaded through a peer-to-peer website.

The legislation would impose fines of up to 300,000 euros -- the equivalent of about $440,000 -- as well as possible prison terms for the illegal download of films or music.

The National Assembly, the lower house of parliament, passed the bill on Tuesday 258-131, a day after the Senate approved it.

The first e-mails to those who infringe the new law should go out starting in January 2010, according to the Minister of Culture.

The bill replaces a tougher version of the legislation that was rejected as being unconstitutional.

Internet piracy has become a global concern, with some musicians, authors, filmmakers and others who create content complaining that illegal downloading is essentially stealing their work.

A British government minister laid out the problem in a recent speech.

The digital age has made it easier to create content, but it's also made it easier to copy it -- and some people who do that do so without paying a royalty to authors or musicians, said David Lammy, Britain's minister for higher education and intellectual property in the Department for Innovation, Universities and Skills.

"The harsh reality is that not everyone recognizes that they have a moral and legal obligation to return some of the money they generate to those who created the work," he said in a recent speech.

Some have advocated strict government controls, backed up by sanctions, to limit online piracy, he said, while others have suggested different approaches.