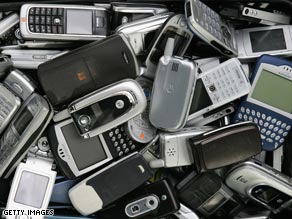 An estimated 1.2 billion cell phones were sold in 2008, at least half of which were replacement handsets.

The GSMA (Groupe Speciale Mobile Association), which represents more than 750 of the world's cell phone operators, made the announcement at its annual Mobile World Congress in Barcelona Tuesday.

Under the scheme, phone makers have pledged that a majority of new handset models will include the universal charger by January 1 2012. The planned device will use a micro USB plug.

Aside from bringing relief to drawers stuffed full of redundant chargers, the GSMA stressed that the new device would reduce raw materials.

"The mobile industry has a pivotal role to play in tackling environmental issues and this programme is an important step that could lead to huge savings in resources, not to mention convenience for consumers," said Rob Conway, CEO and member of the board of the GSMA in a statement.

Last year an estimated 1.2 billion cell phones were sold, according to University of Southern Queensland data reported by the GSMA, of which handsets accounted for between 50 and 80 per cent. That equates to between 51,000 and 82,000 tonnes of chargers.

The GSMA hopes the initiative will slash the greenhouse gases that result from the manufacture and transport of chargers by 13.6 and 21.8 million tonnes each year.

"There is enormous potential in mobile to help people live and work in an eco-friendly way and with the backing of some or the biggest names in the industry, this initiative will lead the way," Conway added.