(CNET) -- Verizon Communications has had a change of heart about using Wi-Fi to extend its wireless broadband offering as the company announces free access to Wi-Fi hot spots for its Fios and DSL Internet customers. 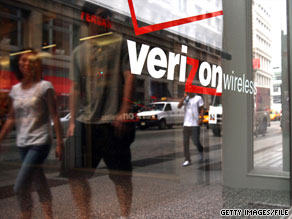 Verizon experimented with deploying its own Wi-Fi hot spots several years ago in New York, but dismantled them.

On Monday the company announced that customers subscribed to its Verizon Fios Internet service with 20Mbps per second downstream and 15Mbps upstream or faster and customers who subscribe to its 3Mbps/768 Kbps or higher DSL service will be able to connect to Verizon Wi-Fi hot spots, at no additional charge as part of their broadband service.

Verizon has partnered with the Wi-Fi service Boingo to offer access in thousands of locations throughout the U.S. including hotels, airports, restaurants, coffee shops, retailers, convention centers and public locations across the U.S.

The company has a Web page where customers can locate these Verizon hot spots. For example, in New York City, the service is available at many Barnes & Noble bookstores, as well as at JFK airport, and in some Starbucks locations.

For the past few years, Verizon has downplayed the importance of Wi-Fi. The company experimented with deploying its own Wi-Fi hot spots several years ago in New York City, turning old phone booths into wireless hot spots.

The service never took off, and Verizon dismantled the hotspots. The company was also a vocal critic of many municipal Wi-Fi projects, including the one in Philadelphia.

But as other broadband providers start offering Wi-Fi access for free with their services, it seems that Verizon has decided to jump on the Wi-Fi bandwagon. AT&T has been offering free Wi-Fi to its high-speed Internet customers for more than two years.

And cable operator Cablevision, which competes in Verizon's territory, launched its Wi-Fi service last year. Cablevision and Comcast have teamed up to provide free Wi-Fi access to their subscribers who commute by offering the service on train platforms .

Verizon spokesman Eric Rabe argues that the Verizon offering is better than what cable offers because it is available nationwide. The cable Wi-Fi networks are only available regionally where the cable providers operate.

Rabe stopped short of admitting that Verizon has changed its tune when it comes to Wi-Fi. He said the company is merely answering the demand from its customers.

"I would call this an expansion of the way we see mobility," he said in a phone interview. "We are broadening how people access the Internet when they aren't at home. And we're doing it because our customers have told us it's what they want."

Rabe does not think that the new Wi-Fi offering will cut into the company's wireless broadband business, which requires a monthly service and contract to get access to the company's 3G wireless network on laptops. This service costs about $60 a month for up to 5GB of Internet usage a month.

While the speeds on the 3G network are slower than when using a Wi-Fi hot spot, the wireless broadband card offers access to the Net wherever Verizon's 3G cellular network is available.

"Our cellular 3G network allows people to be truly mobile," he said. "And you can't do that with hot spots. So I don't think it will compete at all with our wireless broadband service. There will still be a lot of users, particularly business customers, who still want the reliability and ubiquity of 3G wireless."

Verizon has also been touting its new 4G wireless network, which will be in trials later this year in Seattle and Boston. The new network, which uses a technology called LTE, or Long Term Evolution, will go live commercially in 2010. The company expects to have the entire network built out by 2013. Verizon's plan is for the 4G network to provide wireless connectivity to a whole range of devices other than cell phones, laptops, and Netbooks.

Some Windows Mobile phones may be able to access to the Wi-Fi hot spots, but he isn't certain that that is the case. And he could not confirm whether the Apple iPhone would be able to connect to the Verizon hot spots.

AT&T , which is the exclusive U.S. carrier for the iPhone, already offers free Net access to iPhone users in its more than 20,000 hot spots.

All About Verizon Communications Inc.