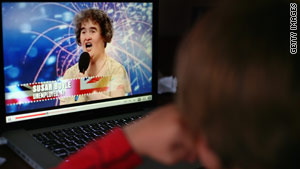 (CNET) -- As hard as it may be to remember now, the dot-com boom was nearing its dizzying peak as the decade started. But just as the bust hit a few months later, Google was pairing a savvy business model with great technology, Apple was most decidedly getting its mojo back, and Bill Gates was becoming exasperated with those pesky trustbusters.

Since then, Google became a giant, the iPhone broke through the smartphone design barrier, and social media went mainstream. But what was the biggest story? As the decade comes to an end, we offer our list of the 10 most important tech stories of the decade.

It was the decade of tech mega-mergers. Oracle bought a good portion of the enterprise software industry. Once business picked up, Cisco Systems went on a buying spree, buying everything from Flip camera maker Pure Digital to set-top box manufacturer Scientific Atlanta. And other big companies like IBM and EMC gobbled up smaller players.

But for sheer drama, nothing came close to the HP-Compaq merger, which played out from May 2001 to June 2002. Old-line HP folks, led by family scion Walter Hewlett, aggressively fought against the merger.

But HP's board, led by flamboyant CEO Carly Fiorina, convinced shareholders they had to get bigger in order to compete with tough companies like Dell and IBM. The fight was the subject of two books and an endless stream of invective (pro and con) from the tech press.

Ultimately, Fiorina may have been vindicated. HP looks to be emerging stronger than ever from the recession while Dell stumbles. But her focus on the big picture and inattention to detail proved to be her undoing.

She was forced out and replaced by NCR CEO Mark Hurd in March 2005, who has proven to have the management chops Fiorina lacked.

Although Bill Gates handed over the CEO reins to Steve Ballmer back in January 2000, Gates' move to step away from full-time employment at Microsoft in 2008 marked a significant changing of the guard, leaving a new team led by Ray Ozzie in charge of the company's technology plans.

Gates made the exit slowly, announcing his plan to leave in June 2006, but not making the shift to part-time work until the end of June 2008.

Although Gates was there to preside over the beginnings of Microsoft's shift to cloud computing, that focus has intensified in the 18 months since Gates retired.

The shift also freed Gates up to spend even more time on his philanthropic efforts, in which the Bill and Melinda Gates Foundation aims to reshape global health efforts as well as the U.S. education system.

You can argue Google's $1.65 billion acquisition of YouTube in 2006 was more about bringing television to the Web than offering legitimacy to social media. Either way, it was a milestone for the tech industry.

If Google or another big suitor had not gobbled YouTube, it's not hard to imagine the video-sharing site, despite its popularity, failing because of rising costs and litigation with content owners. Google offered a buffer for YouTube (still does) while it worked on becoming more than a neat idea.

The eye-popping price tag, which even Google CEO Eric Schmidt acknowledges was mighty steep, also helped spark a run on Web 2.0 investments and primed the market for other social-media platforms, such as Facebook and Twitter.

Of course, the great question with these social-media companies is profitability. Facebook, for example, recently announced it turned cash positive, but any accounting student will tell you that's not the same thing as being profitable. Still, if any company can provide a model for turning a hugely popular social-media site into a cash machine, it will be Google.

7. Craigslist and the slow fade of traditional newspapers

Google News and other news aggregation sites have become a favorite bete noire of traditional media magnates such as Rupert Murdoch. But the latest shoving match ignores Craigslist, the little company that has laid salt to newspapers' biggest moneymaker, classified ads.

Critics like to joke that Craigslist is just "Bolshevism with a smile," but there's no doubting its impact. Today, in most major cities, it's Craigslist calling the classified shots.

No surprise then that newspapers from Boston to San Francisco have seen major layoffs, while local pubs in cities such as Detroit and Seattle are trying to recast themselves as online publications.

But there's no toning down Craigslist's impact on newspapers. At left, empty newsstands sit in a lot in San Francisco, which is also the home of Craigslist.

To search or not to search? That was a question first asked with Yahoo's unwise decision to outsource its search business to Google in 2000, giving its upstart competitors a huge vote of confidence and limiting Yahoo's ability to innovate in the business.

But in 2004, Yahoo brought the search business back in-house. By then, Google had become the dominant search engine and, well, a verb.

In February 2008, Yahoo was reeling and Microsoft came calling, offering an unsolicited $31-per-share bid, roughly a 62 percent premium above the trading price for Yahoo shares. So what happened? Jerry Yang & Co. said no. They even tried to outsource the search business (again!) to Google, only to be foiled by a threatened federal antitrust lawsuit. Eventually, Microsoft walked away.

But the search yo-yo still wasn't finished. After Jerry Yang stepped down in late 2008, one of new CEO Carol Bartz's first orders of business was to, yes, get out of search and outsource the business to Microsoft's new Bing search engine. The latest pairing is still waiting on government approval.

Apple has always been able to turn product releases into events, but nothing came close to the hysteria leading to Apple's June 2007 release of the iPhone.

Customers camped out for days outside Apple stores across America as the (some would argue overly fawning) tech press heaped praise on Steve Jobs' landmark product.

For once, however, the hoopla was warranted. The iPhone was the first smartphone that captured the attention of the average consumer, and it was an enormous breakthrough in user-interface design on a small screen. It was, in effect, the Macintosh of the mobile market.

The iPhone's release also forced rapid development from competitors ranging from Microsoft and Research In Motion to Nokia and, now, Google.

Most of the real innovation in today's tech industry is in mobile computing, and we have the iPhone to thank for that.

In March 2000, the tech-led stock bubble peaked. Not long after, all heck broke loose. Within months, tales of Silicon Valley janitors driving Ferraris were replaced by Wall Street Journal ride-a-longs with repo men taking back the Ferraris.

Now it all sounds pretty silly. Did we really expect grocery delivery services and pet food stores to be the next great American enterprises? But the impact of the tech bust wasn't just to start-ups.

Several companies, such as Cisco and Oracle, cut fast and are now more powerful than ever. Others, such as Sun Microsystems (currently waiting for regulatory approval to become Oracle's latest acquisition), never really recovered from losing so many customers so quickly.

The end of the bubble also changed the way start-ups were financed in Silicon Valley. Gone were the days of massive -- and let's face it, questionable -- venture financing for unproven companies and execs. What emerged was a flintier, but perhaps more sustainable financing approach to start-ups.

3. Microsoft and the feds make a deal

Remember this? The antitrust suit humbled Microsoft, cost it billions in fines paid out to rivals, (possibly) kept Sun alive by handing it $2 billion in 2004, and perhaps most importantly cleared the way for the rise of Google and cloud computing. That would have happened to some extent anyway, but keeping Microsoft execs distracted and less competitive than they were in the 1990s only helped.

Of course, it wasn't Microsoft's only run-in with regulators. Also in 2004, the European Union hit Microsoft with a big old antitrust fine.

And Microsoft was beset with antitrust issues throughout a good portion of the decade. There's no doubt that antitrust fears have forced the once rabidly aggressive Microsoft to act more judiciously.

Nothing changed entertainment and the fortunes of Apple more than iTunes.

iTunes enabled Apple to become the juggernaut in entertainment, retail, and hardware it is today. Without iTunes, the iPod is just another digital music player. The music store paved the way for the iPod, the iPhone, and 100,000 applications and led to the revamping of the music industry. It might also change the television and film sectors as well.

iTunes turned Apple from a niche PC manufacturer to one of the most important companies in American industry. Think of it like this: six years after it launched, there's still no legitimate challenger.

Without Adwords, Google is a terrific search engine in search of a business model. Launched in 2000, Adwords added the little contextual ads next to the billions of searches conducted on Google engine.

By the close of 2009, those little ads, along with the contextual ads run on partners through the Adsense service, brought in the vast majority of Google's estimated $17.39 billion in annual revenue.

Sure, it's a question of the chicken or the egg. You can't sustain a business without revenue. And you can't bring in revenue (in this case through one very smart acquisition) without a compelling product. The combination of the two is what makes Google Google.

But without those little ads, the Google story becomes a tale of a technical curiosity rather than the rise of a business powerhouse to rival Microsoft and, arguably, the most important company in tech.

Interestingly, as the decade comes to an end, Google is drawing the sort of unwanted government scrutiny that Microsoft received in the '90s. Will Google be humbled by the trustbusters in the coming years?

Or will it learn from Microsoft's mistakes and make nice with the feds before business plans get squashed? For the tech press, that's likely to be the biggest story of all in the coming decade.