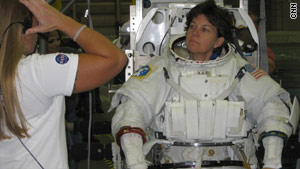 Editor's note: This is the latest in a yearlong CNN series, "Counting Down Cady," that follows NASA astronaut and mother Catherine "Cady" Coleman as she prepares for a November 2010 trip to the international space station. Watch the "Counting Down Cady" TV segments on CNN's "American Morning." Follow her story on the AMFix blog.

The spacesuit she must wear for training at the Johnson Space Center here weighs more than twice the body weight of the petite astronaut.

"Some people think you might have a custom spacesuit, and you don't," she says. "They're in a generic size."

Pads are added and adjustments are made to ensure a custom, comfortable fit for each astronaut. The suit Coleman is training in is similar to the one she will wear if she must do a spacewalk next year while aboard the international space station.

In November, if everything goes according to plan, Coleman will blast off on a Russian Soyuz rocket for the station, where she will live for the next six months.

Preparing for that trip has been a tricky balancing act for Coleman, who can spend one evening cooking dinner and picking up toys and the next preparing to orbit the Earth at 17,000 mph. Coleman splits her time between Houston, Texas and western Massachusetts, where she lives with her her husband and their 9-year-old son.

On Earth, gravity is not as kind to Coleman as it will be in space. Her spacesuit weighs 300 pounds.

Coleman sits on the floor as two NASA trainers help her wiggle into the bottom half of her spacesuit. Once the pants are on, she is helped onto a platform, which is attached to a crane, where she finishes dressing.

Next Coleman slides up into the top part of the spacesuit. Once her head pops out, Coleman's suit is clasped and locked into place. Then her helmet is placed on her head and Coleman is ready for the crane to lower her into a massive swimming pool.

The pool is known as the Neutral Buoyancy Laboratory, or NBL in NASA-speak. The largest facility of its kind, it is 202 feet long and 102 feet wide and holds 6.2 million gallons of water. The water is such a clear blue that you can see the space station mock-ups sitting on the pool floor.

In the pool, whose underwater conditions can somewhat approximate the feeling of floating in space, Coleman will practice repairs and safety. The training session lasts six hours.

"There's a set of scenarios that we make sure we do so we can fix whatever we think are the most likely things to go wrong on the space station," Coleman says. Although she's wearing an oxygen tank, she jokingly pretends to hold her breath as she's lowered into the pool.

One training drill requires her to play an incapacitated crew member who must be rescued by another astronaut. In the exercise, Coleman must count on Italian astronaut Paolo Nespoli to save her.

Coleman has known Nespoli for years, but Expedition 26 is the first mission on which they will be crewmates.

A European Space Agency Astronaut, Nespoli visited the international space station in 2006. Coleman was at Nespoli's launch to act as a liasion for the families of the crew.

Next year's mission will have an international flavor: The commander is Russian cosmonaut Dmitri Kondratyev.

"I feel very comfortable working with people from different nations, from Europe, from the United States, Japan, from Canada," Kondratyev says.

This year, the three-person crew's training will take them all over the world to learn about each country's module that makes up the space station -- an orbiting collection of research components.

Astronauts train continuously even when they are not assigned to a mission. This is how Coleman met Kondratyev before they were assigned to Expedition 26.

"I knew Dima from robotics [training]," Coleman said. "We spent a lot of time together -- in fact two weeks in Canada together."

The training is more than just learning the technical aspect of the job. Coleman says this is a time when the astronauts develop crucial relationships with their crewmates, trainers and the people who work in mission control.

They have about a year to work on those relationships. As the date closes in, the crew is well aware that the training will intensify and their international travel will increase.

Nespoli says with a laugh, "I am just waiting for this training to finish so I can be in space and relax a little bit."