Conference puts focus on the future of real-time Web 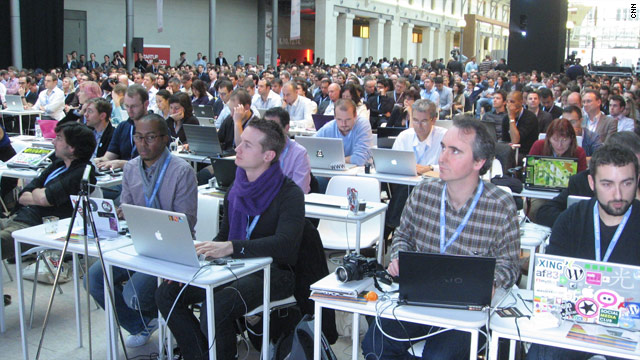 Attendees listen to speakers on the opening day of the Le Web conference in Paris.
STORY HIGHLIGHTS
RELATED TOPICS

Paris, France (CNN) -- The future of social networking, the real-time Web and a host of apps and gadgets were the talk of the annual Le Web conference as it opened here Wednesday.

The phenomenal success of microblogging site Twitter and its plans for the future dominated the two-day event's opening sessions for bloggers and industry leaders, held in a converted morgue in the city's northeastern suburbs.

Top executives from Twitter faced off with rivals from Facebook and MySpace as all three social media sites unveiled technical innovations designed to capture more users.

On the heels of Twitter founder Jack Dorsey's unveiling of Square, a device that accepts credit card payments on cell phones, Twitter platform director Ryan Sarver said the site now has 50,000 dedicated applications making use of its constant stream of blog updates.

Sarver also announced the company's "firehose" feature, which throws open its data stream to any developers who want to use it. This is a first for Twitter, which has yet to disclose any major revenue streams even as others use it to harvest profits.

Facebook developer Ethan Beard touted his own site's 500,000 applications and its power to drastically boost hits to news sites such as The Huffington Post through the 60 million users it now claims for its Facebook Connect feature.

Meanwhile, MySpace Chief Operating Officer Mike Jones announced that his site is incorporating real-time status updates to its platform -- like Twitter and Facebook -- amid MySpace's struggles to find an identity.

Chad Hurley, co-founder of Google-owned YouTube, also refused to disclose company revenues but said some popular users have earned more than $1 million since advertising was introduced to the video-sharing site.

"We didn't implement [advertising] initially on YouTube because we didn't want to skew the motivation of why someone would publish video. We wanted to be a video community," he told the conference.

"We saw over time the opportunity to introduce that secure revenue without distorting what we've become, and we've been quite successful," he said.

But Hurley said he had no secret formula for anyone wanting to create a viral sensation on YouTube.

"You could punch me in the face right now, that would get a lot of views," he joked.

"Something shocking will get a lot of views, but there's no magic recipe. That's not really what the site is about -- to define the secret ingredient to get the hits. It's about celebrating the fact that everyone has a chance to participate."

On the sidelines of Le Web, the chatter was focused on the Facebook vs. Twitter battle and the opening of data streams to app developers. Attendees also wondered aloud about the fickle and unpredictable nature of Internet success.

"It is interesting that everybody now is announcing awards and conferences, but what's next?" said delegate Katrin Weber of Deutsche Telekom.

"In the end, who is going to win? People are also asking what the formula for success is -- why do some applications or platforms succeed, and why do some fail?"

Social media marketing agent Vero Pepperrell said, "I'm pleased that Twitter is starting to acknowledge how much of an ecosystem it has with its developers, so on that level, they are doing the right thing."

"Today, if you want to run a service, you need something to bring the physical world. You cannot depend only on an online application, you need to do something tangible," he said.

"It is the future, it is not only [about] the screen experience, it is about something more physical. People need to be producing more than just apps."

More than 2,000 participants from 46 countries were expected in Paris for the Le Web conference, one of Europe's largest annual tech events.