At a loss for words? Google offers search by sight 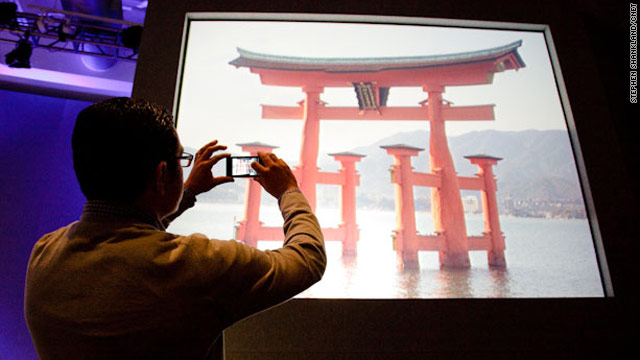 Vic Gundotra of Google takes a photo of the Itsukushima Shrine in Japan. The Google Goggles feature successfully identified it.
STORY HIGHLIGHTS

On Monday, Google announced the ability to perform an Internet search by submitting a photograph.

The experimental search-by-sight feature, called Google Goggles, has a database of billions of images that informs its analysis of what's been uploaded, said Vic Gundotra, Google's vice president of engineering. It can recognize books, album covers, artwork, landmarks, places, logos, and more.

"It is our goal to be able to identify any image," he said. "It represents our earliest efforts in the field of computer vision. You can take a picture of an item, use that picture of whatever you take as the query."

However, the feature is still in Google Labs to deal with the "nascent nature of computer vision" and with the service's present shortcomings. "Google Goggles works well on certain types of objects in certain categories," he said.

Google Goggles was one of the big announcements at an event at the Computer History Museum here to tout the future of Google search. The company also showed off real-time search results and translation of a spoken phrase from English to Spanish using a mobile phone.

"It could be we are really at the cusp of an entirely new computing era," Gundotra said, with "devices that can understand our own speech, help us understand others, and augment our own sight by helping us see further."

Offering one real-world example of the service in action, Gundotra said that when a guest came by for dinner, he snapped a photo of a wine bottle she gave him to assess its merits. The result--"hints of apricot and hibiscus blossom"--went far beyond his expertise, but that didn't stop him from sharing the opinion over dinner.

He also demonstrated Google Goggles to take a photo of the Itsukushima Shrine in Japan, a landmark tourists may recognize even if they can't read Japanese. The uploaded photo returned a description of the shrine on his mobile phone.

Although the service can recognize faces, since faces are among the billions of images in the database, it doesn't right now, Gundotra said.

"For this product, we made the decision not to do facial recognition," Gundotra said.

"We still want to work on the issues of user opt-in and control. We have the technology to do the underlying face recognition, but we decided to delay that until safeguards are in place."