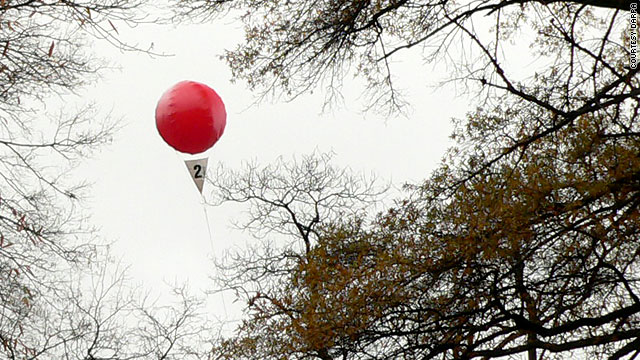 Ten floating red balloons across the United States will be the target in Saturday's challenge.
STORY HIGHLIGHTS
RELATED TOPICS

(CNN) -- On Saturday, thousands of people nationwide will search the skies in a high-tech scavenger hunt designed to test how far-flung groups can use the Internet and technology to work together.

The DARPA Network Challenge calls on groups to pinpoint the locations of 10 red weather balloons scattered around the country -- with a $40,000 prize going to the first team to find them all. DARPA, which stands for Defense Advanced Research Projects Agency, is the U.S. military's research arm.

This year's contest is designed to test the the way social networking, crowdsourcing or lesser-known Web-based techniques can help accomplish a large-scale, time-critical task.

Johanna Jones, a spokeswoman for the military's DARPA, said the hunt -- set to begin Saturday at 10 a.m. ET -- is designed in part to give the military new ideas on ways to operate in a range of situations, from natural disasters to combat.

"It's an opportunity to reach out to groups that are very comfortable with social networking," she said. "Reaching out to some of these groups, they may actually come up with some great ideas for the future."

The contest is the latest in a series that the agency has been hosting since 2004. The past competitions have focused largely on robotics. But this year -- the 40th anniversary of the invention of the Internet -- DARPA is focusing on techniques emerging as real-time communication online continues to expand and change.

At 10 a.m. ET, the 8-foot-wide red weather balloons will be released on property accessible to the public.

"They're not going to be out in the middle of nowhere," Jones said. "They're going to be near places where there is traffic."

She said the balloons will be tethered and will remain aloft for at least six hours. Each will be accompanied by a DARPA representative.

The first person to report the latitude and longitude coordinates of all 10 balloons will win the prize. The competition will remain open until December 14.

The challenge was announced on October 29 -- 40 years after the first message was sent on ARPANET, the precursor to the Internet, in 1969. DARPA hopes the contest will lead to advances in the way the military communicates and coordinates activities among multiple, geographically separated groups.

"The DARPA Network Challenge taps into the same fresh thinking that made the earlier competitions a success," said Norman Whitaker, who led DARPA's most recent robotics challenge. "Future innovation depends on the upcoming generation of technologists who are discovering new, collaborative ways to approach problems that were not dreamt of 40 years ago."

As of Thursday, about 1,000 people had registered for the hunt. Twenty-eight groups had registered on the challenge's public wiki page, although organizers said many more are working in private.

Many of the teams are recruiting members and some say that, if they win, they'll donate the proceeds to charity. They boast of tools ranging from an iPhone application to a GPS-enabled mobile site to use in the hunt.

Jason Brindel, 42, an advertising consultant from San Rafael, California, has organized a team of about 140 people to try to locate the balloons. He's also created a Web site and a Twitter account for team members to use to communicate.

On Saturday, he plans to activate a Web page that will allow anyone to submit information to his team -- as long as they provide details about how they confirmed their information.

If his group wins, Brindel plans to divide the prize money 11 ways -- between himself and the person who reports the location of each of the 10 balloons.

While some team members plan to fan out in their regions of the country and scan the skies for the balloons, Brindel thinks a better method will be scouring the Internet for obscure mentions of the balloons on news sites, blogs and Twitter feeds.

He said he's a fan of the concept of "crowdsourcing" -- throwing work that would traditionally be done by one person, or a few people, to the masses via the Internet -- and looks forward to seeing it applied in ways that would have been impossible before.

"Things have definitely changed in the last decade and a half," he said. "We live in a different world that most of us couldn't imagine 20 to 30 years ago."

Jones believes Saturday's scavenger hunt is not that different from DARPA's past robotics competitions, like the one that challenged teams to build a robot that could walk from Los Angeles to Las Vegas (it proved unsuccessful).

"This is very similar in a way," she said. "They're going to be building things, but the tools are pretty much all there. It's how you put it together in an ingenious way ... that's interesting."