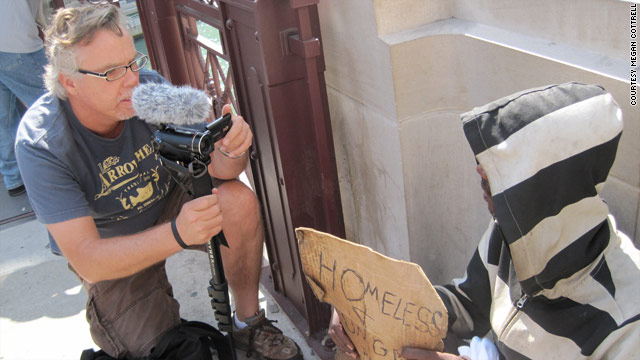 (CNN) -- Fourteen years ago, Mark Horvath was in crisis. The former exec was living on the streets in Hollywood, California, where for a dollar he let people take a photograph of his pet iguana, named Dog.

"I was sitting by the Chinese theater with my iguana, surrounded by Asian tourists, with my head down, thinking, 'How am I going to get out of this?' " said Horvath, whose nickname was the "Lizard Man of Hollywood Boulevard."

Last month, Horvath returned to Hollywood Boulevard, this time as a featured speaker at the 140 Characters Conference, a Twitter-inspired gathering attended by movers and shakers in social media. Horvath told the audience how he uses an arsenal of social networking sites -- Twitter, Facebook, Whrrl, MySpace, YouTube, Vimeo and Flickr -- to illuminate the plight of the nation's homeless.

Armed with a hand-held videocamera, a microphone, a laptop and an iPhone, Horvath approaches homeless people on their own turf and empowers them to share their personal stories. He posts the raw, unedited video interviews on his Web site, InvisiblePeople.tv, and other places.

For Horvath, the stories he captures hit close to home. He was once a Hollywood distribution executive with a six-figure salary. In 1995, he lost it all to drug and alcohol addiction.

Horvath cleaned up with the help of the Dream Center in Los Angeles, a nonprofit ministry and outreach that supplies food, shelter and life rehabilitation to people in urban areas. He went into faith-based broadcasting and marketing, and eventually relocated to St. Louis, Missouri, in 2005.

"I rebuilt my life and bought a three-bedroom house with a swimming pool," Horvath said. "From homeless to a 780 credit score is a miracle."

After two years of stability, however, Horvath faced another challenge: the faltering economy. He lost his marketing job for a church in St. Louis and spent nine months unemployed.

"When I went to McDonald's and Home Depot [to apply for jobs], they wouldn't look at me because I made too much money," said Horvath. "I lived off my credit cards to cover my mortgage and food. I maxed out two cards."

Horvath relocated to Los Angeles for another marketing job with a Christian denomination, only to be laid off three months later.

He was seven weeks from being out on the street again when he started InvisiblePeople.tv in November 2008.

As someone who knew firsthand the shame of homelessness, Horvath felt compelled to do something about it. He wanted to share stories about others like him and put a face -- many faces -- on the problem.

I thought nobody was telling their story, and I needed to go there.
--Mark Horvath

In April, he took a major risk that became a turning point for his cause. He spent his last $300 on a trip to Sacramento to interview homeless people in the tent communities that had sprung up there as a result of the recession.

"I thought nobody was telling their story, and I needed to go there," he said. "I left [Los Angeles] knowing that I could be evicted."

"I call it 'reality twittering,' " Horvath explained. "I try to engage people and bring them along for the ride."

The ride took some uncomfortable turns. In one Twitter update, Horvath wrote, One man upset at media starts screaming at me. I walk away. Two guys follow me to my car. I'm scared and rethink my sanity.

I start walking fast yet keep hearing a guy getting closer yelling at me. I turn and he is behind me on the path running. He was very upset, he wrote in another post.

Horvath's visceral tweets caught the attention of Whrrl, based in Seattle, Washington. The Whrrl team intently followed the updates from their office that day.

"We were all shocked that this man had the courage to go up and help people, even in a violent situation," said Heather Meeker, Whrrl's spokeswoman.

Whrrl invited Horvath to meet with their developers in Seattle, and the company hosted a tweetup -- a gathering of Twitterers -- on his behalf.

"He's not trying to pull the wool over anyone's eyes. He's been there," said Chris Pirillo, a technology expert for CNN.com who met Horvath in Seattle. "It's still very uncomfortable to watch the videos, because it's just so raw."

For lack of a better word, it's brutal. It's cruel; it's senseless. It's so unnecessary.
--Cotton, on being homeless

"All of a sudden, people started talking about [my project]," Horvath said. "There were a lot of influential people in social media that were giving me money. I came home with rent money."

A few months later, Horvath decided to take InvisiblePeople.tv on the road. Supported by Whrrl, social-media donors and corporate sponsors, he traveled across the country to capture the modern realities of homelessness. Ford Motor Co. lent him a car, Hanes donated socks, and Whrrl created a Web page to track his progress.

Horvath videotaped more than 100 homeless people along his journey, which took him to more than 20 cities. He encountered several disabled people, including a woman named Cotton who has lived in a tent in Greensboro, North Carolina, for 16 years.

She told Horvath on camera what it was like for her to be homeless. "For lack of a better word, it's brutal," she said. "It's cruel; it's senseless. It's so unnecessary."

In New York, Horvath interviewed a woman named Joni who spends her nights on a bench in Times Square. The video shows tourists strolling past as Joni tearfully tells Horvath her three wishes: "To have a home, to wake up with food, and that everybody would just stop all of this."

In more than a few instances, Horvath's visits resulted in immediate help, from new housing and feeding programs in Fayetteville, Arkansas, to new shoes for 50 children in Baton Rouge, Louisiana.

Horvath's impact on the Web exceeded his expectations. At least 1,000 videos are watched each week on his Vimeo channel alone. On Twitter, he has a combined 10,000 followers to his two streams, @hardlynormal and @invisiblepeople. Mashable hailed him as one of five people who broke the rules of social media and succeeded. Last month, the Huffington Post named him among the top activists to follow on Twitter.

He isn't making money. ... He's doing this to make a difference. You can't say that about many people.
--Heather Meeker

"People within the tech community have really embraced him," Meeker said. "They know that he isn't making money from this, but he's doing this to make a difference. You can't say that about many people."

In August, Pirillo invited Horvath to speak at the Gnomedex technology conference in Seattle. Other speaking invitations followed from BlogWorld, the Idea Camp and the 140 Characters Conference.

"I felt like it was very important for his story to be heard," said Jeff Pulver, creator of the 140 Characters Conference. "I was in awe just reading his tweets. I didn't know his name, I just knew him as HardlyNormal."

Despite the attention, Horvath continues to scrape by with the help of churches and friends in social media. Still in debt, he covers his rent by working a temp job at a homeless shelter in Glendale, California. He has no health insurance.

"My crisis has not changed, but I have," he said. "All I can do is focus on helping other people, and in doing so, my problems seem to disappear."

As recently as last week, the pressure almost got the best of him, and he was close to calling it quits. He went for a walk and was reminded of his purpose.

"On that walk, I saw a homeless man who had no socks," Horvath tearfully recounted. "I had socks, so I knew I couldn't quit. I walked back to my car and grabbed socks. I knew if it wasn't me, then who?"

Horvath often concludes his video interviews by asking his homeless subjects to share their three wishes for the future. When asked that question himself, he appeared startled.

"My first wish would be that people really see the reality of homelessness," he replied after a moment of hesitation. "And that we develop communities and work as a team to solve the problem."

The third? "I would like security and normalcy to my life, but with a name like HardlyNormal, it's never going to happen," he said with a laugh.