By Rick Klau, Special to CNN 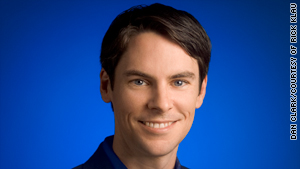 Editor's note: Rick Klau is a product manager on the Blogger team at Google. His blog is at http://tins.rklau.com/.

(CNN) -- Bernard Bailyn, the Harvard historian who won a Pulitzer for his 1967 book "The Ideological Origins of the American Revolution," wrote about the critical role pamphlets played in 18th century America.

Simply put, he said, pamphlets "allowed one to do things that were not possible in any other form."

Bailyn went on to explain that pamphlets are "always short ... can be produced much more quickly than a book, and in principle, at any rate, can reach a bigger public. Above all, the pamphlet does not have to follow any prescribed pattern. ... All that is required of it is that it shall be topical, polemical, and short."

I read Bailyn's book not long after I started my own blog, and his description of pamphlets sounded a lot more like a description of blogging than anything else I'd read at the time. (I wasn't the first to note this connection -- Dan Bricklin, co-creator of VisiCalc, made the same observation two years before I did.)

Blogger turned 10 years old this past August, and in that decade, blogging has become a mainstream medium for millions. People around the world rely on services like Blogger to produce modern-day pamphlets: often short, quickly produced and capable of reaching a much larger audience than yesterday's pamphleteer could have ever hoped for. More than 300 million people worldwide visit a Blogger blog at least once a month.

Blogging is a worldwide phenomenon and is growing every year. There are blogs in every language, and they range from the trivial to the most critical issues of the day. There are blogs about badly made professional cakes, blogs about the student-led revolution in Iran, blogs about secrets, blogs written by cats and blogs that showcase letters written throughout history.

Blogs have helped make the Web more personal and, in the process, have made the Web more social. Blogging -- along with other tools like Facebook and Twitter (often referred to collectively as "social media") -- present individuals all over the globe with an unprecedented ability to express themselves.

But with this breadth of opinion come challenges. This past summer, the writings of a blogger from the former Soviet republic of Georgia made him the target of a massive cyber attack by one or more individuals, resulting in outages for several services and silencing not only his voice but those of millions of others across social media sites.

And it's not just individuals. Governments around the world block access to entire Web sites (including Blogger, Twitter, Facebook, YouTube and many more), preventing their citizens from seeing what others have posted or from writing anything themselves. (This map, maintained by Global Voices Advocacy, is a sobering archive of the attempts at blocking access to these services.)

The most translated document in the world is the United Nations' Universal Declaration of Human Rights. Its Article 19 states, "Everyone has the right to freedom of opinion and expression; this right includes freedom to hold opinions without interference and to seek, receive and impart information and ideas through any media and regardless of frontiers."

It is one thing to have this right, another entirely to exercise it. As George Orwell, himself a pamphleteer, remarked: "Pamphleteering can only flourish when it is fairly easy to get one's writings printed."

Blogs today provide the ideal platform for exercising the right to speak and be heard, enabling millions to express themselves and find their audience.

As the Internet increasingly becomes the medium through which more people communicate, it is more important than ever that this universal right is acknowledged and defended.

The opinions expressed in this commentary are solely those of Rick Klau.