Is your date a 'stud or dud?' Ask your phone 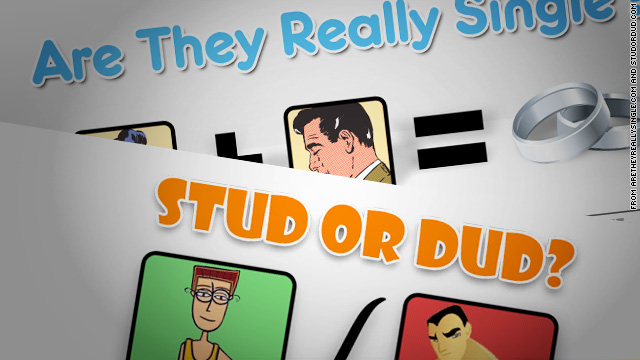 (CNN) -- If that dreamy blind date seems too good to be true, or the guy at the bar with a martini and a pencil-thin moustache looks a little sketchy, the truth about them -- or at least some of it -- could be found on your phone.

Designers at a pair of companies say their new applications for smartphones can tell you in real time whether someone is married or divorced, has a criminal record, has filed for bankruptcy or has any number of potential red flags in their past.

Using Google to search for information on a prospective romantic partner is standard practice for many single people in the digital age. But these new apps, combined with the growth of smartphones and wireless networks, now allow for quick background checks on the go, potentially before a date is even over.

The lighthearted iPhone apps Stud or Dud? and Are They Really Single? -- from online information broker PeopleFinders -- have far-reaching potential for convenient snooping, and not just on potential dates. Their makers say that in today's society it's increasingly important to check out people's backstories.

"There are more and more strangers in people's lives," said Bryce Lane, president of the PeopleFinders Network. "There's this digital awakening where people are in online communities -- they're meeting people they don't have information on.

"We think that's a problem. Yes, there are a lot of opportunities to meet great new people, but a lot of people are misrepresenting who they are."

Meanwhile, another data company, Intelius, is offering a similar app called DateCheck for the Android and BlackBerry, with other platforms in the works.

Marketed with the slogan, "Look up before you hook up," the application has such features as a Sleaze Detector, which checks for criminal offenses, and $$$, which uses property ownership records to gauge someone's financial assets.

DateCheck offers some less-serious information, too. Its Interests feature trolls for information on educational background, social networking activities and professional history while Compatibility compares the subject's horoscope and astrological sign with the user's.

With Stud or Dud? the user punches in as much information as they have on their subject. Results can range from past addresses, real estate ownership and business and professional licenses to bankruptcies, evictions, criminal records and what the company calls "possible relationships."

Are They Really Single? scans marriage and divorce records.

Accurate searches also require a date of birth, which may be tricky to extract tactfully from someone on a first or second date.

Lane said all information comes from public records that are available to anyone. But PeopleFinders, which has been collecting data for more than 20 years from sources all over the United States, pulls it all together into one database.

"We're hoping they're fun apps and they're helping you learn about the people that you come into contact with," Lane said. "They're easy to use and we're pretty hopeful that they're going to be popular."

Both PeopleFinders apps will only return results on people 18 or older.

Advocates of online privacy say they see some problems.

Paul Stephens, a director at consumer group Privacy Rights Clearinghouse, said the main danger lies in thinking you've dug up dirt on someone when you've actually found someone else.

"If you only have limited information about the individual, it's going to be culling from various sources that may or may not [find] the person you're trying to investigate," said Stephens. "You need to take the information with a grain of salt."

While the iPhone apps are aimed at dating, the information is bound to be used in other ways, he said.

"In the case of a person not dating somebody, it's not that big a deal," said Stephens. "But we've had cases where somebody might not get a job because of an inaccuracy [from online information brokers], so it does become a big deal."

He said his group, based in San Diego, California, would like to see more organizations regulated by the same federal laws that monitor fair and accurate credit reporting.

"We feel very strongly that it's educational, it's informative, it's actually helping the public," he said. "It's what you don't know about people that could potentially hurt you."

He said the applications clearly show when results include multiple people and tell users that the more detail they provide, the more likely they will get an exact match.

Lane said anyone who asks can be removed from the company's database, but he suggested that most of those who do have something to hide.

"Criminals ... of course they don't want this information out there," he said.

In a column on technology Web site Gizmodo, editor Rosa Golijan described the PeopleFinders apps as fun and joked that it was depressing to find out how many of her ex-boyfriends were "duds."

She also noted at least one apparent glitch, when Are They Really Single? told her that a former high school sweetheart might be married to his grandmother. (In fairness, the app did say it was unlikely.)

Golijan dismissed privacy concerns, saying most of the info on the apps could be found "from a few clever Google searches."

"I don't think there's reason to panic about privacy due to this app," she said. "The same information and searches have been available for a long time."