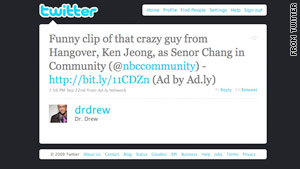 (CNN) -- The Twitter phenomenon, in which anybody can tell his or her followers anything -- in 140 characters or less -- now has a payoff that can go beyond the thrill of self-publishing.

A handful of companies are offering to pay Twitterers to gain access to their followers -- so they can send them Tweets containing ads. The more followers you have, the more money you make.

Dr. Drew Pinsky cut a deal with one such company, Ad.ly, of Beverly Hills, California, which describes itself as "an instream advertising platform that connects top-tier Twitter publishers with top-tier brands."

Pinsky is a television and radio personality, an internist and an addiction specialist, but Ad.ly considers him a publisher.

The lone advertisement that Ad.ly sent to Pinsky's 1.5 million Twitter followers was for the NBC program "Community," a comedy about a lawyer who has lost his license and is trying to get his life together at a community college. Chevy Chase and Joel McHale star.

"I'm delighted to support the show; Joel McHale is a friend of mine," Pinsky said.

"If someone wants to offer me some money to talk about something that I feel strongly about on Twitter -- and I don't feel it's diminishing in any way my messages -- I don't see why not," he said.

But Pinsky said he was not sure he would do it again. "It's treacherous," he told CNN in a telephone interview. "I don't want people to think I'm exploiting my followers."

Concern about a possible backlash from those followers has led him to reject suggestions for other ads, Pinsky said. "It's something I would only do very, very occasionally and really has to be something that I already feel I would support."

He cited advertisements about vaccinations or certain screening programs as possibly acceptable, but said even then he would be concerned about turning off his followers. "On the one hand, I have got to send my kids to college; on the other hand, I don't want to damage my relationship with my audience," said the father of teenage triplets.

CEO Sean Rad, 23, founded the company that sold Pinsky on the idea in May. "We were basically looking at Twitter early on and we've watched it grow from this place where people were kind of playing with content creation to this very powerful platform where people are using Twitter as their main platform for content creation and content discovery," he told CNN in a telephone interview.

"We view every Tweet as valuable content," he said. "It takes time and thought to produce. Everywhere else, where you generate content you get compensated. Same for a lot of these celebrities on Twitter. Their time is money, yet they're not getting compensated. We're answering a demand we saw with all these publishers."

All he needs to monetize Twitter posts is to match the publisher with an advertiser and everybody wins, Rad said. "The advertiser gets as close as possible to an audience and that publisher gets compensated."

The company launched its service in late September, and Rad said it has already signed up eight of the approximately 50 individual twitterers who have more than 1 million followers.

But it's not just for celebrities. "We have thousands of mid-tier and top-tier publishers; we're growing rapidly," he said. Anyone can sign on and, depending on how many followers they have, start approving ads and earning income, he said.

Advertisers include Universal Pictures, Dell, Maserati, Hilton Hotels and "a bunch" of other national brands, he said.

Though Pinsky said he did not know how much his one deal netted him, and Rad would not divulge it, the tech entrepreneur did say a single Tweet could net the publisher a sum in the five figures.

Rad downplayed Pinsky's concern that his followers could feel exploited. "If I'm Dr. Drew and getting paid for activity on Twitter, I'm going to take it more seriously," he said. "So the audience gains because, when you pay somebody to do something, they typically do a better job -- higher quality content. The artist now can justify the time on Twitter."

Each publisher is limited to one Tweeted advertisement per day, he said.

Rad said Ad.ly's model -- or Ad.ly itself -- could help Twitter cash in on its own success. He said his company's model would be one way for Twitter to monetize. "Obviously, an acquisition from Twitter would be awesome," he said.

But that wouldn't be the only way. "I would pay for a premium stream that had no ads in it," said Francine Hardaway, a marketing specialist and partner in Stealthmode Partners.

"Maybe that's Twitter's own monetization model," she said in a posting on scobleizer.com, a blog. "And I also like content providers to be paid. But the more indirectly the better."

Twitter Director of Media Partnerships Chloe Sladden told CNN in an e-mail, "We generally aren't commenting on our monetization plans at the moment."