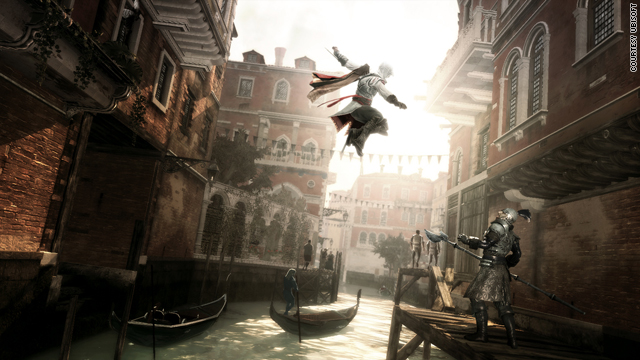 "Assassin's Creed II," which transports the player to Italy during the Renaissance, should be a hit with gamers this season.
STORY HIGHLIGHTS
RELATED TOPICS

(CNN) -- Like a well-placed power-up, the right gift can light up the eyes of that video gamer in your life.

But for non-gamers, navigating the many offerings at your local store can be confusing. So with that in mind, here are suggestions, grouped by category, on some of the most buzzed-about games for holiday giving.

Make sure you know which gaming console (PlayStation, Xbox, Wii) your gamer has before you shop. Prices for these games will range from $30 to $60, depending on the store and any promotions or sales. Check online or at your local store for the latest pricing.

These are only a few of the games in demand this holiday season. If you have other recommendations, feel free to let us know in the comments area at the bottom of this story.

These games are all about firepower. There is very little in the way of plot other than "kill the other guys." But they satisfy the gamer who just wants to see how many aliens, soldiers and spaceships they can destroy.

"Halo 3: ODST" (Bungie; Microsoft) is a first-person shooter expansion of "Halo 3" that has a different feel than its previous incarnation. The game-play is similar, but the campaign is fresh with a new, character-driven storyline. "Halo 3: ODST" is available only on the Xbox 360 and is rated M (Mature -- blood, language, violence). 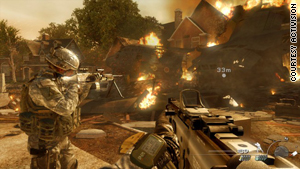 "Call of Duty: Modern Warfare 2" has been a monster hit.

"Star Trek D-A-C" (Naked Sky Entertainment; Paramount) is a top-down shooter game based on the "Star Trek" movie that came out last summer. The game is stylized more like a classic arcade game -- think Asteroids -- but offers multiplayer as well as single-player mode. There aren't any Klingon ships to destroy, but you can take out your Trek aggression against the Romulans. Available on the Xbox 360, PS3 and PC and rated E (Everybody -- fantasy violence).

"Borderlands" (Gearbox; 2K Games) transports the player to the strange and hostile world of Pandora where a planet believed to be full of minerals is inhabited only by bandits and myths ... and fortune. The game is a first-person shooter, but does have some elements of role-playing with four separate characters to try on or share with your friends. Available on the PS3, Xbox 360 and PC and rated M (Mature -- blood and gore, intense violence, mature humor, strong language).

So your gamer wants the feel of slaying a dragon, exploring uncharted territory or recovering a rare artifact? These games will immerse your gift recipient in bold new worlds. But beware! You might not see them for a very long time. 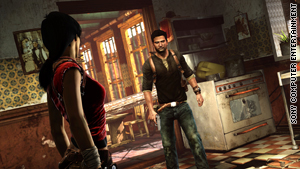 "Uncharted 2: Among Thieves" traces the steps of a treasure hunter as he searches for the lost fleet of Marco Polo.

"Uncharted 2: Among Thieves" (Naughty Dog; Sony) traces the steps of treasure hunter Nathan Drake as he searches for the lost fleet of Marco Polo. Superb graphics and detailed historical background make this an immersive, movie-like experience. And it's funny in all the appropriate spots. Available only on the PS3 and rated T (Teens -- blood, language, suggestive themes, violence).

"Dragon Age: Origins" (Bioware; Electronic Arts) is a role-playing game that will have gamers choosing to save the world for good or for evil. Its rich fantasy realm is filled with legends, surprises and combat that will draw in and please even the most casual RPGer. Expect to lose a lot of time with this one. "Dragon Age: Origins" is available for the PS3, PC, and Xbox 360 and is rated M (Mature -- blood, intense violence, language, partial nudity, sexual content).

The "God of War Collection" (Bluepoint Games; Sony) makes the first two "God of War" games playable on the PlayStation 3. The games are the same as their PS2 ancestors, but with added features such as trophy collecting and a playable demo for "God of War III." They also got upgraded to HD format, making them look better than ever. Available only on the PS3 and rated M (Mature -- blood and gore, intense violence, nudity, sexual themes, strong language).

"Assassin's Creed II" (UbiSoft) transports the gamer to Italy during the Renaissance to play as an assassin trying to gain revenge for murder and betrayal. The graphics are gorgeous, and even educational, when key features and historical sites are explained. But it's the free-flowing action that will glue your gamer to his controller for hours. Available on the Xbox 360, PS3, PC, Nintendo DS and iPhone and rated M (Mature - blood, intense violence, sexual content, strong language).

"Batman: Arkham Asylum" (Rocksteady; Eidos) is the closest to being a costumed superhero your gamer will ever get (except at Halloween). Players are overwhelmed by the action, the atmospheric setting, the characters and the jokes. After all, the game's villain is the Joker. Available for the Xbox 360, PC and PS3 and rated T (Teens -- alcohol and tobacco reference, blood, mild language, suggestive themes, violence).

Some days, players just want to relax with a game that doesn't takes days to complete, can be played over and over, and perhaps brings back memories with familiar characters or sounds. These games may fit the bill. 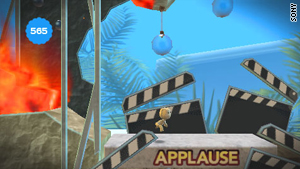 "LittleBigPlanet" taps the creative side of your young gamer with fun puzzles.

"LittleBigPlanet" (Sony) taps the creative side of your gamer with fun puzzles, silly sounds and a Sack Boy that rivals the cuteness of kittens. It also gives them the opportunity to create their own levels to play, redesign and play again. For additional challenges, gamers can also upload their levels to the Web and download others. Available for the PS3 and the PSP and rated E (Everyone -- comic mischief).

"New Super Mario Bros. Wii" (Nintendo) brings back the classic Mario game with updated features, graphics and some new game-play twists. Mario the plumber, Luigi, and Princess Peach all return, and our heroes can now be used in multiplayer fashion so there's no more waiting for your turn. Available only on the Wii and rated E (Everyone -- Comic Mischief).

"Ratchet & Clank: A Crack in Time" (Insomniac; Sony) finds our space-traveling heroes once again zooming across the galaxy, vanquishing evil and saving the universe. This time, Ratchet and Clank do some time traveling, use upgradable guns and have actual battles in space -- meaning more boom for your gaming buck. Available only on the PS3 and rated E (Everyone -- animated blood, comic mischief, fantasy violence).

"The Beatles: Rock Band" (Harmonix) and "Guitar Hero 5" (Activision) are the newest major releases in the popular music-game genre, which let you embrace your inner rocker by playing along with "Helter Skelter" or "Smells Like Teen Spirit" on plastic guitars and drums. Both are available for PS3, Xbox 360 and Wii and are rated T (Teens -- lyrics and mild suggestive themes).

The squeal of burning rubber, the squeak of sneakers on the court, the thrill of competition -- these are the things a sports gamer craves. These selections should satisfy the gamer jock in your life.

"Gran Turismo" (Polyphony Digital; Sony) puts realistic driving in your hands. The race-car game offers over 800 different vehicles to choose from, with a multitude of tracks to run them on. While there isn't a career mode, the game makes up for it with variety and smooth controls. Available only on the PSP and rated E (Everyone). 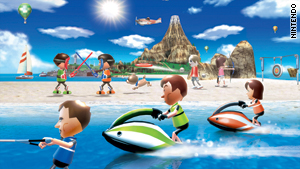 "Wii Sports Resort" transports you to an activity-filled tropical island.

"Wii Sports Resort" (Nintendo) offers 12 different sports, including archery, kayaking and water-skiing. It comes with an upgraded controller which attaches to your Wiimotes for a more accurate motion-capture feel. The game lends itself to great fun with friends and is playable by all age groups. Available only on the Wii and rated E (Everyone).

"NCAA Basketball 10" (Electronic Arts) gives the gamer all the excitement of college basketball without leaving the comfort of their chair. The game recreates the look of many actual arenas, complete with rowdy fans. Its style, which looks like you're watching a TV broadcast of the action, even captures some of the thrill of March Madness. Available on the Xbox 360 and PS3 and rated E (Everyone).

A handful of major games will be coming out in early 2010, so getting a gift card might be a good choice for the hardcore gamer who has everything.