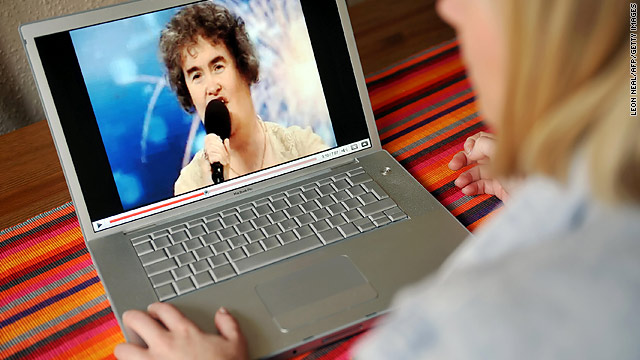 YouTube's video revolution, led by accidental stars such as Susan Boyle, is among the Webbys' top Internet stories of the 2000s.
STORY HIGHLIGHTS

(CNN) -- The explosion of Craigslist's online classifieds. The death of Napster. The "Twitter Revolution" in Iran.

All big moments on the Internet. In fact, they're among the 10 biggest of the past decade, according to the Webby Awards.

The group that runs the awards -- itself an online institution for more than a decade -- on Wednesday released what it considers the 10 most influential Internet moments of the 2000s.

The list includes both high-profile moments and quieter events that would prove to be turning points in the years that followed. It does not rank the 10 in order of importance.

"That depends on who you are and what you're interested in," David-Michel Davies, the executive director of the Webby Awards, said. "The Internet is life in a way ... . What's the most important moment in the world is a broad question."

The staff of the Webbys is accepting nominations through December 18 for the 14th annual awards, to be handed out next year. They picked their finalists by going through annual awards they've handed out since 2000 and winnowing the list down.

Davies said it will be interesting to see how kind the next decade is to their decisions.

"Maybe in twenty years we'll look back and some of these might change," he said. "Something might become more important. I think history and time always give you more insight into what moments or sites or companies shaped the landscape."

In chronological order, here are the Webbys' Top 10:

• Craigslist expands beyond San Francisco (2000): When the free classifieds site broadened its reach into nine more cities, it began a major shift away from newspaper classifieds, according to the Webbys. Craigslist now hosts listings in more than 500 cities in 50 countries.

• Google AdWords launches (2000): The Webbys say the launch of Google's self-service ad program opened up the online marketplace, allowed advertisers to better target their customers and, in short, "turned advertising on its head."

• Wikipedia launches (2001): The free, open-source encyclopedia now has more than 14 million articles in 271 languages with 20,000 of those coming in the first year. The Webbys credit Wikipedia with being an early example of strangers from around the world coming together to collaborate on projects.

• Napster shuts down (2001): Although the controversial file-sharing site bemoaned by many in the recording industry shut down in 2001, the Webbys note that it opened up the floodgates. Hulu, iTunes and other legal sites followed, as did downloading songs from less reputable sites and artists releasing their music exclusively online.

• Google's IPO (2004): One of the largest stock offerings in history put the search engine on the path to becoming what the Webbys call "the most dominant and influential company of the decade." Gmail, YouTube, Google Earth, Google Maps and Android would all follow.

• Online video revolution (2006): Faster bandwidth, cheaper camcorders and YouTube's use of Adobe's Flash 9 video player combine to make online video explode. "The trifecta led to a boom in homemade and professional content - the Diet Coke and Mentos guys, lonelygirl15, SNL's Lazy Sunday, and Sen. George Allen's "Macaca-gate" -- that has reshaped everything from pop culture to politics," the Webbys write.

• Facebook opens up, Twitter takes off (2006): In September, Facebook expands from only college students to anyone older than 13. Almost overnight, social networking went mainstream. Less than a month later, Twitter's owners acquire the company, paving the way for the service to take off the following year.

• The iPhone debuts (2007): It was released on June 29, 2007, and by the end of the weekend a half-million had been sold. The phone from Apple has inspired a slew of other smartphones and an app for just about every aspect of modern life.

• Iranian election protests (2009): When Iran's power structure announced dubious results from its presidential election, the opposition took to social networking and the "Twitter Revolution" was born. The Web let protesters beam images from the chaotic country at a time when mainstream media outlets had been severely hampered. Twitter became so fundamental in spreading news of the protests that followed that the U.S. State Department asked the company to delay a planned shutdown for maintenance, the Webbys note.