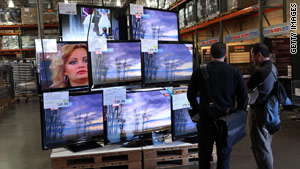 (CNN) -- The California Energy Commission voted unanimously Wednesday to become the first state to impose energy efficiency standards for televisions. The agency estimates the move will save consumers $1 billion a year in energy costs.

"The real winners of these new TV energy efficiencies are California consumers, who will be saving billions of dollars and conserving energy while preserving their choice to buy any size or type of TV," Energy Commission Chairman Karen Douglas said in a statement.

It is expected to reach 18 percent by 2023, according to the commission. The standards are expected to reduce energy consumption, thereby lowering energy bills. It's also expected to help avoid the construction of a new power plant and reduce carbon dioxide gas emissions, the commission said.

Some retail groups and trade associations denounced the regulations, claiming they needlessly limit consumer freedom and may result in the loss of retail jobs and sales tax revenue.

A study released by CEA in April responding to California's proposal estimated that $50 million in state sales tax would be lost as a result of some models being unavailable in stores, driving consumers to buy televisions online and out-of-state.

"You have regulators dictating what kinds of TVs people can buy in California, but they can still buy them online or go across the border to Nevada and buy them," he said.

The commission acknowledged that more than 1,000 TV models on the market already meet the 2011 standards, at no greater cost than less-efficient sets. But the commission's study said there is no evidence that efficiency standards would send consumers across the border in search of models that will run up their energy bills.