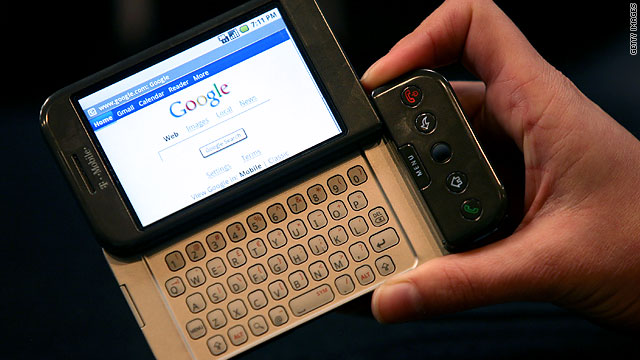 Could Google become a serious rival to AT&T and Verizon?
STORY HIGHLIGHTS

(Wired) -- Google is set to become your new phone company, perhaps reducing your phone bill to zilch in the process.

Google has bought Gizmo5, an online phone company that is akin to Skype  but based on open protocols and with a lot fewer users. TechCrunch, which broke the news on Monday, reported that Google spent $30 million on the company.

It's a potent recipe -- take Gizmo5's open standards-based online calling system. Add to it the new ability to route calls on Google's massive network of cheap fiber. Toss in Google Voice's free phone number, which will ring your mobile phone, your home phone and your Gizmo5 client on your laptop. ÿþ

Meanwhile you can use Gizmo5 to make ultracheap outgoing calls to domestic and international phone numbers, and free calls to Skype, Google Talk, Yahoo and AIM users. You could make and receive calls that bypass the per-minute billing on your smartphone.

Then layer on deluxe phone services like free SMS, voicemail transcription, customized call routing, free conference calls and voicemails sent as recordings to your e-mail account, and you have a phone service that competes with Skype, landlines and the Internet telephone offerings from Vonage and cable companies.

"Google is now the the uncommon carrier," Abramson said, punning on the iconic 7-UP commercials and the phrase "common carrier." That refers to phone companies that operate on the traditional publicly switched network -- a status that gives them benefits and obligations.

"All of a sudden you have something that offers more than Skype," Abramson said, saying the combo could now put Google in competition with phone and cable companies, IP "telephony" (VOIP) companies and Vonage. "But now you can do everything with Google and pay nothing and have a platform where engineers can build new things."

In fact, Gizmo5 offered a rogue version of that service for $6 a month until last week.

On November 2, Gizmo5 abruptly canceled the two-month old "residential service," which paired the free phone number available through Google Voice with Gizmo's Internet calling service to provide the equivalent of a home-phone replacement like Vonage.

Now, that service has been wiped off the Internet and, more intriguingly, Google's cache of the page disappeared the day after the acquisition was reported.

For $6 a month, Gizmo5 residential users got 300 minutes a month of outbound calling anywhere in the United States, unlimited incoming calls on their home computers or even home phones (using a broadband-to-phone network conversion box) and E911 service (which means 911 calls work like landlines calls do, once you register your home address).

It's not too surprising that offer got taken down.

For one Google is already trying to steer clear of U.S. regulators by making it clear that Google Voice isn't a replacement for a home phone since you have to have phone service from some other company to use it. You can forward calls from a Google Voice number to your Gizmo5 number, but you must have a mobile or landline number as well.

Google doesn't say it, but clearly it hopes that restriction will keep the service from incurring the common carrier obligations attached to the regular phone system (PSTN), and the 911 and wiretapping requirements that apply to Internet telephony and to traditional copper wire phones.

AT&T itself has sued similar services that play this arbitrage game, and complaining to the feds may have only brought more attention to an issue the FCC has procrastinating fixing for too long.

Gizmo5 will also help save Google money on phone-call termination fees as users start to use computer-based clients to connect to Google Voice. That would allow Google to recoup the purchase price of $30 million in little time, if only it saves even a few dollars per user per year.

Google also gets Michael Robertson, a troublemaker with technical chops. Robertson made millions from MP3.com in the dot-com boom, despite drawing lawsuits from major record labels for creating innovative services. He was later sued by Microsoft for his startup Lindows, which made Linux installations for cheap PCs. And his current music venture, MP3tunes.com, is being sued by EMI.

Though still in invite-only mode, Google Voice has about 580,000 active users and nearly 1.5 million registered users, according to a Google filing with the FCC.

If you are interested in the combination, you might want to sign up for Gizmo5 before the acquisition is formally announced, since Google often freezes new registrations at companies it acquires until it figures out how to integrate the technology.