Mullenweg: 10 blogs to make you think

By Matt Mullenweg, Special to CNN 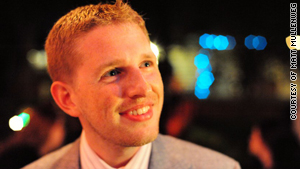 Editor's note: Matt Mullenweg is the co-founder of the WordPress blogging software and founder of Automattic, a company than runs WordPress.com and Gravatar.

(CNN) -- There are 100 million blogs in the world, and it's part of my job as the co-founder of WordPress to help many more people start blogging.

I think we're doing pretty well on that front, but it does mean that sometimes it feels overwhelming to wade through all of these blogs to find one that will be informative, entertaining -- or whatever you're looking for.

Sometimes you might feel blogs are like TV: You have a thousand channels but nothing good is on. But if you want to take a dip into the blogosphere, here are 10 eclectic blogs that, if nothing else, will make you think.

Or, at least they make me think:

Scripting News is the blog of Dave Winer, the father of many technologies that are crucial to the Web. Dave writes every day and you're as likely to read about something intensely personal he's going through, like the passing of his father, as you are to read about the real-time Web.

Open... by Glyn Moody covers the application of open-source thinking to fields as wide-ranging as politics, genomics, content, and of course, software.

Scott Berkun is a former Microsoftie who has graduated to being one of most erudite authors on innovation, creativity, management, and now public speaking. He's like a modern-day Peter Drucker.

Raw Thought from Aaron Swartz is a diverse blog from a deep thinker and troublemaker. The former is evidenced by his New Yorker-length treatise on John Maynard Keynes' "General Theory," while the latter is shown in his posted FBI file (you can request yours).

Philip Greenspun posts "every day; an interesting idea every three months." See how a successful startup founder and engineer thinks about his post-startup life, taxes, helicopters, and photography.

Tim Ferriss is best known for his best-seller "The Four Hour Workweek," but I'm most impressed by his blog on "lifestyle design," or basically taking an analytical approach to your health and happiness.

Paul Graham, also a successful startup founder, has transformed himself into a philosophical leader of entrepreneurs. He espouses his view through thoughtful essays and invests in aspiring entrepreneurs through his venture firm Y Combinator.

The Official Dreamhost Weblog is probably the most interesting blog from a company -- ever. Each entry floats and wanders through vaguely inappropriate language and visual non-sequiturs before finally bringing you back home in a way you couldn't have predicted; it's more crazy than corporate.

Signals vs. Noise is another company blog, this one from 37 Signals, but at its core is an ongoing argument for simplicity in all things: design, code, and culture.

XKCD is daily comic that you'll never find in a newspaper -- it's too smart, too honest, too Web. For an extra bonus, hover your mouse over the image and see a hidden caption.

And though it's not a blog, check out Werner Vogel's Twitter to get insight into the mind of the CTO of one of the most innovative technology companies in the world, Amazon.