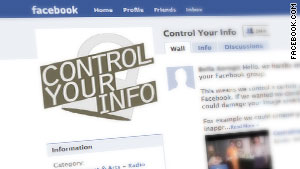 Hundreds of Facebook groups have been hijacked by users protesting what they say are flaws in how the site is run.
STORY HIGHLIGHTS
RELATED TOPICS

(CNN) -- Hundreds of Facebook groups have been hijacked in recent days by users pointing out what they say is a weakness in how the social-networking site handles the administration of its groups.

By Tuesday morning, 286 groups had apparently been renamed Control Your Info and had a new message posted to their walls.

"Hello, we hereby announce that we have officially hijacked your Facebook group," the message reads. "This means we control a certain part of the information about you on Facebook. If we wanted we could make you appear in a bad way which could damage your image severly [sic]."

According to Control Your Info, when Facebook group administrators step down, anyone else can take over their duties -- giving them access to members' personal information, the ability to send messages to all members of the group and the authority to make changes to that group.

"For example we could rename your group and call it something very inappropriate and nasty like 'I Support Pedophiles' Rights,' " the message continued. "But have no fear. We won't."

Among the groups renamed "Control Your Info" on Tuesday were a "Twilight" fan group, supporters of a high school football team and patrons of a Virginia winery.

In a statement, Facebook said no confidential information has been placed at risk.

"The groups in question have been abandoned by their previous owners, which means any group member has the option to make themselves an administrator in order to continue communication to the group. Group administrators have no access to confidential information and group members can leave a group at any time," said a Facebook spokesperson.

"For small groups, administrators can simply edit a group name or info, moderate discussion, and message group members. The names of large groups cannot be changed nor can anyone message all members.

"In the rare instances when we find that a group has been changed inappropriately, we will disable the group," the spokesperson said.

The names of two Facebook users who have posted Control Your Info messages after group takeovers -- Janis Roukkos and Bella Roregit -- did not appear to have active Facebook accounts by mid-morning Tuesday.

A message on Control Your Info's Web site blamed Facebook for shutting down the group's fan page. Members of the group could not be reached for comment Tuesday.

"This isn't some kind of scare tactics, nor is it a hack, it's a feature that can be used, and is being used, in bad ways," the post reads. "Remember, control your info! Also, this project is strictly not for profit and done for a good cause."

Not all members of the groups that were hijacked were taking the stunt in the spirit it was apparently intended.

"It's pretty inappropriate and [expletive] you hijacked a facebook group for Palestinian rights to selfishly promote your little conspiracy theory page," one user wrote. "I reported this to facebook and others should too."