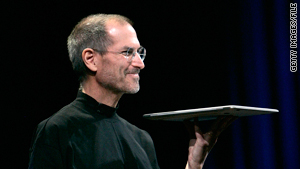 (Wired) -- If you've only been half paying attention, you probably think that the Apple Tablet is a done deal.

It isn't. Outside the impervious hallways of One Infinite Loop, the tablet remains a technological unicorn -- a mythical beast whose beauty, elegance and singularity we can only imagine.

Wired.com is among the vast majority of publications which fervently believes, however. We have found supporting evidence in all manner of tea leaves, including the decision by Apple to allow iPhone developers to create free apps that can be platforms to charge for something.

This is probably just a way of porting the shareware model to mobile. But a free shop window would also be a perfect way for publishers, we argued, to offer readers the same chance to sample content.

Apple admits nothing, of course. In a recent meeting with media executives, including some from Wired's parent company, Condé Nast, attendees were required to sign a non-disclosure agreement, participants told Wired.com. Despite this precaution, the word "tablet" was never uttered -- indeed, hardware wasn't even discussed.

What's In It For Steve?

Tablet speculation mostly centers on what's in it for the user, and third parties, including the print media. But the key is what's in it for Apple -- more specifically, what's in it for CEO Steve Jobs. We think there's one thing that makes an Apple Tablet inevitable: Jobs is considering his legacy, and he wants it to include saving the media, pulling it back from the brink at its darkest moment.

Many have defined the problem -- people are abandoning old media for new in droves -- but nobody has come remotely close to figuring out the formula to monetize this audience in a way that ensures the range and level of news and periodical content and offers the rich experience advertisers will pay a premium to be part of.

Pulling it off would take characteristic Apple hardware/software flair -- and a bit of uncharacteristic magnanimity. But the "X" factor is Jobs himself. Whatever you believe about his health, Jobs will not live forever. We're guessing that he, like all high achievers, believes that yesterday's accomplishments, however fantastic, are also yesterday's news.

If he is looking for One Last Thing, saving journalism would be the Holy Grail.

Success is hardly guaranteed -- and that might be a consideration as well. The Apple Tablet will have to resonate like the MacBook Air did not, because in the second-device sweepstakes the mobile phone is number one. A tablet will have to be a suitable replacement for a portable computer, with comfortable inputs (did someone say Mighty Mouse?) as well as all the tools and data access you might want at any given time.

To do cool new things, we're betting the operating system will have to be a "Three Bears" solution: A full-blown OS X is too big and the iPhone's is too little. Something in the middle would be just right.

The device will have to make readers forget -- really forget -- the printed page. E-readers, for all that they do, don't do this yet. There are plenty of them, and plenty more on the way. Much hope is invested in Amazon's Kindle DX, which hits the market for the holidays. But in the end e-readers are third devices, or at least two-and-a-half (carried sometimes).

Finally -- and this is the "my gift to you" part -- the unveiling of an Apple Tablet will have to be accompanied by a fundamental policy change. Apple will have to let publishers roll the dice on pricing and cede control of the customer relationship it has jealously guarded.

There are precedents which could point to this trajectory; tiered pricing and album-only sales are allowed on iTunes now, and app developers can more or less charge whatever they want.

It's a tall order, but Jobs' resume is one long treatise on paradigmatic yet somehow pragmatic innovation.

• He breathed new life into animated film with Pixar. The studio has put out 10 features, every single one a commercial and critical success.

• The music industry may grumble, but Apple fixed their business with an iTunes/iPod ecosystem and a one-price-fits-all policy that made sure not all music was going to be provided by pirates. Note: Sexy hardware and frictionless fulfillment were key.

• At a time when it was clear consumer portables were the future, Apple created a desktop -- the iMac -- and the line is more popular than ever.

• In a mobile phone market controlled by a tiny band of hide-bound telcos and handset makers, Apple busted through with the iPhone.

• Despite eulogies to the brick-and-mortar model Jobs goes viral with the Apple Store. There are 200 now and their New York flagship may be the highest-grossing store on Ritzy Fifth Avenue.

Even given this track record -- and what we choose to believe is the all-trumping motivator of perfecting his legacy -- a device-centric initiative that saves newspapers and magazines that seem to be in perpetual, some say irretrievable, decline, sounds next to impossible.

But is anybody seriously willing to bet against the house -- of Jobs?