A cordless future for electricity? 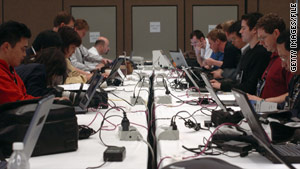 Researchers are working to cut the cord on electricity, making tangles of wires a possible thing of the past.
STORY HIGHLIGHTS
RELATED TOPICS

(CNN) -- Electronics such as phones and laptops may start shedding their power cords within a year.

WiTricity's version of wireless electricity -- which converts power into a magnetic field and sends it sailing through the air at a particular frequency -- still needs to be refined a bit, he said, but should be commercially available soon.

Giler, whose company is a spinoff of a Massachusetts Institute of Technology research group, says wireless electricity has the potential to cut the need for power cords and throw-away batteries.

"Five years from now, this will seem completely normal," he said.

"The biggest effect of wireless power is attacking that huge energy wasting that goes on where people buy disposable batteries," he said. Watch Giler demonstrate the idea

It also will make electric cars more attractive to consumers, he said, because they will be able to power up their vehicles simply by driving into a garage that's fitted with a wireless power mat.

Electric cars are "absolutely gorgeous," he added, "but does anyone really want to plug them in?"

Engineers have developed several ways to convert electricity into something that's safe to send through the air without a wire. Some of their technologies are available on commercial scales, but they have some limits.

One set of researchers is able to send power over long distances but in very small amounts.

For example, in 2003, a Pittsburgh, Pennsylvania, company called Powercast used radio waves to light a low-power LED bulb that was 1.5 miles from its power source, said Harry Ostaffe, spokesman for the company.

Now, Powercast's technology is used in office buildings to power temperature sensors that regulate air conditioning systems and in other low-power applications. The company also has soldwireless artificial Christmas trees strung with LED lights for about $400, Ostaffe said.

But radio waves can't transfer the larger amounts of electricity needed to power laptops or mobile phones, he said.

Another type of wireless electricity technology can send large amounts of power over very small distances, often not more than a few centimeters.

Such technology is available today, but only in minimal ways. Think, for instance, about electric toothbrushes that sit on charging cradles but don't actually plug in.

One problem with the high-power, small-distance idea is that each device requires its own charging pad, and consumers hate that, said Menno Treffers, chairman of the steering group at the Wireless Power Consortium. The group formed in late 2008 to promote standardization of the technology.

Treffers said consumers soon should be able to buy one power pad that would charge all of their electronic devices. It might look like a placemat, and cell phones, remote controls and appliances would charge automatically when they're placed on the pad.

"The key reason to do it is convenience, because if you want to get rid of all the different power supplies, there are other ways that are cheaper," he said.

The pads, which would rely on electrical sockets as their initial sources of power, also would be more energy efficient than plugging all of the devices into power sockets directly, he said. The pads would shut off automatically when a device has finished charging and are about 70 percent to 90 percent as efficient as transferring power through a wire, he said.

Wire-free chargers for a single item are relatively cheap: about $10 to build, he said. But it's unclear how much pads that could power a living room worth of equipment would cost, he said.

Ultimately, Giler's group from MIT wants to combine the best of both worlds: large amounts of power sent over long distances.

Their technology is called "magnetically coupled resonance," and it basically sends a magnetic field through the air at a specific frequency that an an enabled phone or TV can pick up and turn back into electricity. It works kind of like sound. Think about how an opera singer can break a wine glass if he sings at just the right frequency.

Adding the technology to cell phones, mp3 players and other devices should not increase their cost much, he said.

Despite Giler's optimism, there are some doubts about magnetically coupled resonance.

The biggest barrier to the technology's adoption, he said, is that people just aren't familiar with the idea.