Seven things to know about Windows 7 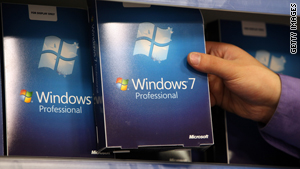 Windows 7, the new Microsoft operating system that went on sale Thursday, is getting good reviews. But is it right for you?
STORY HIGHLIGHTS
RELATED TOPICS

(CNN) -- OK, so after eight years and a lot of grumbling -- Vista, anyone? -- Microsoft has finally released a new operating system that people seem excited about.

Windows 7, which went on sale Thursday, promises a smoother user experience, multi-touchscreen capability and more seamless networking with other computers.

Early reviews have been good.

"We think it's a far superior product to the previous Microsoft operating systems," says Vishal Dhar, co-founder of iYogi, a tech services company. "It's got a more intuitive interface."

Great. But it is right for you? Which version of the software best fits your needs? And are there tricks to installing Windows 7 and navigating its new features?

We anticipate seven of the most common questions about Windows 7 and offer some advice:

Will my aging computer run Windows 7?

Maybe. If your PC can run the much-maligned Windows Vista, it can probably run Windows 7. Check your computer's specs: To install Windows 7, you'll need at least a 1 gigahertz or faster 32-bit (x86) processor, plus at least 2 GB of RAM and at least 16 GB of available hard disk space.

Yes, that sounds like a foreign language to most people. If you're not sure what all that means, try downloading a free Microsoft tool called a Windows 7 Upgrade Advisor, which will scan your PC, report any potential problems and offer ways to fix them.

Is upgrading to Windows 7 worth it?

That depends on your budget and how you use your computer. The software will cost you from $120 to $220, depending on which version you buy. If you're broke and you're happy with your Vista or Windows XP system, then there's probably no rush.

But keep in mind that Windows XP is eight-year-old software, and that it will eventually stop running new applications. Newer operating systems also offer better security against hackers. You'll need to upgrade someday.

Depending on how old your computer is, you may be better off buying a new laptop or PC, preloaded with Windows 7, instead of trying to refresh your aging machine. Retailers such as Best Buy and Dell.com are offering Windows 7-loaded laptops for as low as $499.

Which version of Windows 7 should I buy?

Most casual computer users will probably be satisfied with the Home Premium edition ($119.99), which includes most of the basic features you'll need. That includes Home Group, which makes it easier to share music, video and documents -- a common printer, too -- between Windows 7-enabled computers in a home.

Small business owners and people who work from home may opt for the Professional edition ($199.99), which supports all the Home Premium features while automatically backing up all your data to a networked hard drive.

If you guard corporate secrets or work for the CIA, you'll want the Ultimate edition ($219.99). It comes with BitLocker encryption, which prevents thieves from accessing your files if your laptop is stolen.

How tricky is Windows 7 to install?

If you're upgrading from Vista, it's supposed to be a breeze: Insert the disc, and it does the rest. "It's the easiest upgrade I've ever seen," says J. Peter Bruzzese, who writes about tech for InfoWorld. "All of my settings carried over."

Upgrading from Windows XP is more complicated. Users will need to back up their files, format their hard drive, install Windows 7 and then reinstall browsers, reimport bookmarks and so on. Microsoft has a wizard called Easy Transfer that uses a USB cable to help you transfer files and settings.

It's not officially recommended, but Bruzzese says XP users also can install a borrowed copy of Vista, then upgrade easily from there to Windows 7.

What if I need help?

If you don't have a tech-savvy friend, nephew or neighbor, try Microsoft's online Windows 7 Solution Center, which will walk you through the installation process.

You may also want to consider hiring a tech-support service such as iYogi, whose technicians connect to your computer remotely to diagnose problems, help you install Windows 7 and show you how to migrate your old applications onto your new system. Services start at about $30.

Once XP Mode is running, it fools your older apps into thinking they're on Windows XP. Here you'll find an XP start menu and all your familiar XP features -- all of which should work as they did before. XP Mode is only available in the higher-priced Professional and Ultimate editions, though.

Does Windows 7 have any cool new bells and whistles?

• Well, it's got trippier desktop wallpaper, for one. Microsoft has replaced much of its blandly pretty nature shots with colorful psychedelic images.

• A Library feature allows you to gather files -- documents, photos and video -- from different places on your computer and group them together in new folders by topic, such as "beach house," or "Grandpa Fred."

• A new feature called AeroPeek displays outlines of your open windows behind the window you're working in. A related feature, AeroSnap, allows you to move, shrink and enlarge windows on your screen so that you can see several at once.

• Finally, Windows 7 needs less processing power than previous Windows versions, meaning that in theory, you should be able to work faster and in more windows at the same time. In other words, it's built for today's warp-speed, multi-tasking lifestyle.