'Apps of the Week: Batter Up!' 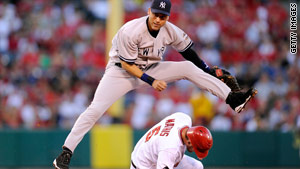 For $9.99, MLB's app will let you watch playoff highlights on your iPhone.
STORY HIGHLIGHTS
RELATED TOPICS

Editor's Note: This is CNN.com's App Wednesday feature. Each week, we feature one or a few mobile phone apps that have caught our attention. Feel free to chime in with tips on how to use these apps, or tell us what we missed.