Two-faced gadget is e-reader plus netbook 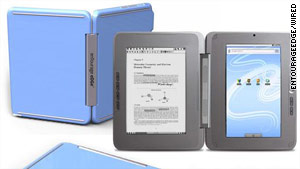 The eDGe device will fold like a book and will be used as an e-reader and a netbook.
STORY HIGHLIGHTS
RELATED TOPICS

(WIRED) -- Like Harvey "Two-Face" Dent, a new dual-screen device has two faces to match its double identity: It promises to be an electronic book reader and a netbook at the same time.

The Wi-Fi enabled device, called eDGe, will fold like a book and can be used as an e-reader. It will also serve as a digital notepad you can use to write notes or highlight text, send e-mails and instant messages, browse the Internet and run apps, say the device's creators. Under the hood, eDGe will be powered by Google's Android operating system.

The left half of the eDGe will have a 9.7-inch E Ink e-paper display. Users will be able to read e-books in PDF and EPUB format and take notes or draw diagrams using a stylus. The right side of the device is a 10.1-inch LCD touchscreen that can be used to check e-mail and surf the Web.

The $490 eDGe won't be available until February, 2010, says its creator, Entourage Systems, a startup based in McLean, Virginia. But the company is taking pre-orders for the device.

Currently, e-book readers and netbooks are among the fastest-growing categories in consumer electronics. Not surprisingly, companies are trying to find ways to meld the two. Netbooks pioneer Asus, for instance, is also working on a dual-screen e-reader. Asus showed a prototype of the device at the CeBIT trade show in March and plans to unveil it at the Consumer Electronics Show in January. Asus' e-reader will likely have two color touchscreens, a speaker, a webcam and a microphone, along with the capability to make inexpensive Skype calls.

The eDGe will have an ARM processor, 4 GB storage, an SD card slot and 2 USB ports. Weighing about 2.5 pounds, eDGe's dual screens will work together, the company says. That means a user will be able to highlight a word from the e-paper screen and drag it to a browser on the LCD screen in order to do a Google search on it. (See a list of eDGe's specs.)

As with many hybrid devices, eDGe runs the risk of not being good enough as either an e-book reader or as a netbook. Also, eDGe doesn't have the kind of integrated access to an e-bookstore that companies such as Amazon and Barnes & Noble can offer with their e-readers. However, because eDGe uses the EPUB format, its customers can access the 1 million free, public-domain books digitized by Google. Getting the latest Dan Brown bestseller may be more difficult.

Still, the eDGe packs in some appealing extras. The device will come with a text-to-speech function and a 1.3-megapixel webcam. It will offer about 16 hours of battery life in e-reader mode and up to 6 hours when running the LCD screen, says Entourage Systems.