(CNET) -- If consumers like the new Windows 7 operating system, they'll have the much-maligned Windows Vista to thank. 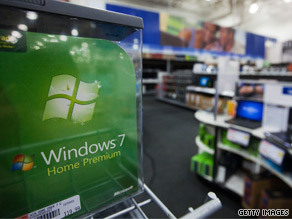 In part, that's because Windows 7 actually builds on the under-the-hood changes that came with Vista. But, it also turns out that the vast headaches created by Vista were just what the PC industry needed to improve their cooperation.

With consumers lukewarm to Vista and many businesses shunning it entirely, both Microsoft and the computer makers realized that the standard way of business just wasn't cutting it, particularly with Apple coming on strong.

Redmond, in particular, was humbled by the response to Vista. When it came time to planning the next version, newly installed Windows development chief Steven Sinofsky took the company's earliest ideas and met with PC makers.

That marked a huge change from past releases, where, as some PC makers described it, Microsoft would just develop windows in secret and then "throw it over the wall."

"Until Vista, Microsoft was fully thinking on their own and implementing their own ideas and then releasing it," said Gianpiero Morbello, a vice president for Taiwanese PC maker Acer.

This time around, though, Microsoft shared its earliest plans, sought input, and held regular meetings with the PC makers. In addition, it dedicated engineering teams to work with each of the biggest computer makers to help them work through any issues specific to their designs.

The result, which goes on sale Thursday, is Windows 7. Although its changes are more modest than those made in Windows Vista, the product has been both on time and well received by testers and reviewers alike.

Close cooperation with the PC makers has resulted in a product that adds few blockbuster features but is roundly praised for making everyday computing tasks simpler and more elegant.

Many of the new features, such as support for iPhone-style touch interfaces, have been heavily influenced by the work with PC manufacturers. Among the first things Sinofsky did upon taking the reins of Windows development in 2006 was to study what happened to Windows when the bits left Redmond and made their way onto new PCs.

When finally asked for their early input, computer makers were not shy with their ideas for how Microsoft could do better. Indeed, the computer makers' fingerprints can be found all over the product from the way it supports touch input to which features are included in which versions of the product.

"I think I was hated in Redmond," said Sony senior manager Xavier Lauwaert. "I just spoke out every time."

Among the changes that came directly from the computer makers was the about-face that Microsoft did with regards to Windows 7 Starter--the entry-level version of the product aimed primarily at Netbooks. Initially, Microsoft wanted to impose a limit of three open applications at a time, in part to distinguish the version from higher-end editions.

PC makers complained loudly that the restriction was too onerous--and might tempt consumers to stick with the older and less secure Windows XP. Microsoft eventually relented and, though it has maintained other limitations, Netbooks with Windows 7 Starter can run as many applications as their limited memory will allow.

Another feature that grew out of discussions with computer makers and business customers is the addition of an "XP Mode"--an option that allows Windows 7 users to run a free, virtualized copy of Windows XP to run older applications that aren't compatible with newer operating systems. In some cases, one incompatible program was keeping businesses from even considering a move off Windows XP.

Phil McKinney, CTO of Hewlett-Packard's PC unit, filled in for his boss at one of Microsoft's regular meetings with computer makers in 2007.

McKinney noted that Microsoft's initial overtures to the computer makers were met with a fair bit of skepticism. "Is this legit or is this just trying to appease frustration," McKinney recalls thinking. "It quickly proved out that Microsoft was serious."

That said, McKinney noted that neither HP nor the other PC makers got exactly what they wanted. "It wasn't like Microsoft just sat there and took up every piece of feedback," he said. "There was give and take." iReport.com: Early review of Windows 7

Microsoft also had harsh messages for the PC companies. The vast amounts of preinstalled software that they were shipping on consumer machines, so-called "crapware" were slowing down systems and hurting the PC's image.

The computer makers and Microsoft began looking at each piece of software, whether it came from the PC manufacturers or a third party, and measuring its impact on the system. Those that were bogging things down were told to fix their software or else got pulled from new PCs.

The result is that Windows 7, in many cases, can boot up more quickly and go in and out of sleep in a matter of seconds. Consumers will also notice they get systems that are a lot less cluttered, in some cases with nothing more than a recycle bin on their desktop when they first boot their PC.

Another big influence was Apple's recent success and, in particular, the benefits it was getting by linking its software and hardware.

"I think there was a recognition by PC (makers) and Microsoft that, for the best experience, the software and the hardware really need to work hand and hand," Osako said.

At its best, McKinney said that things felt more like a hardware and software division working together than it did a collaboration between different companies.

There are still examples of Microsoft and PC makers each deciding they can do things better. Even though Microsoft has a new taskbar, for example, Dell is carrying over the dock it built to help launch Vista applications. The result is that some PCs still feature multiple interfaces, each trying to accomplish a similar tasik.

Microsoft, too, still has room for improvement, PC makers said. Acer's Morbello noted that Microsoft is trying to transform itself from a nearly "obsolete" engineering-driven approach that adds features simply because they are possible to one that focuses on what customers actually want.

"These changes are a transformation of the company," Morbello said.

The task is critical for Microsoft, which depends on Windows for a huge chunk of both sales and profits. At the high end, it faces never-ending challenges from Apple, which now has significantly more resources to invest in the Mac. At the low-end, meanwhile, Google is preparing its Chrome OS, which makes the case that people really just need a fast and efficient browsing experience to handle most computing tasks.

For her part, Reller promised that Microsoft plans to continue seeking PC makers' input as it builds the successor to Windows 7.

"This is the new Windows," Reller said.