Will e-bikes be the new 'commuter cool'?

(CNN) -- Keith Felch is admittedly a big guy, but more than a few super-fit cyclists in Southern California have been left wondering how that dude just went flying by. 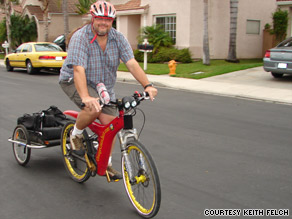 Keith Felch calls his electric bike a "hill eraser" because he can ride it to work without breaking a sweat.

And then his wife, Mary, comes motoring past.

"They stare, like how can a girl go past me," she says, laughing. It takes the other riders a few seconds but then they figure it out.

They have electric motors.

The Felches, who live in Aliso Viejo, California, used to drive everywhere, except when they used their bikes for recreation.

That changed when they got their new e-bikes, made by a company called Optibike. Now, they ride to go shopping and to go to breakfast -- but mostly they ride to work.

Keith Felch says the couple has cut 50 percent of their car-use since they started electric biking.

And there are other benefits. Keith Felch dropped 30 pounds and his blood pressure fell 10 points in the first six months he owned the bike, he says.

The Felches don't exactly classify themselves as "environmentalists," although Mary said it is important to have a positive effect on the planet.

"I learned that the worst amount of smog that you put out [in an automobile] is in the first mile, so if we can make even some of those shorter trips on our bicycles, it makes a big difference," she says.

Many are looking to make a green imprint.

Some are "active adults" who have ridden bicycles for years who -- as they get older -- are unable to do the same kind of riding they did when they were young.

Other buyers want to ride their bikes to work quickly -- and avoid a sweaty entrance into the office.

Oddly -- or perhaps not -- Ultra Motor US sees its strongest sales when the price of oil skyrockets, says Meyers.

Electric bikes are still somewhat of a novelty in the United States, but in China they're everywhere.

In fact, Chinese electric bikes number more than 100 million -- which is about four times the number of Chinese private cars, according to Electric Bikes Worldwide Reports. The bikes are popular in Europe as well.

Sales figures for the United States are hard to pinpoint.

In the United States, about 200,000 electric bicycles were sold last year, said Ed Benjamin of the Light Electric Vehicle Association -- about twice the number sold in 2005.

But the industry has hit a bump in the road from the recession, as sales were down about 10 percent in 2009, he said.

E-bikes are mostly made by specialty companies, but the growing sales trend has been noticed by the big boys.

Trek, a worldwide leader in bike sales, has been making electric bikes for three years, but only introduced them in the United States in the past year.

Other well-known companies like Schwinn and Giant are increasing their presence in the e-bike field.

At Interbike, the biggest bicycle industry convention in the United States, there were more than 20 companies displaying e-bikes this year. Meyers said only a few years ago, it was about five.

Prices increase as battery technology and components get better.

Steve Roseman of The Electric Bike Network in San Francisco, California, said most buyers he sees don't balk at the price, which can be as much as a good road or mountain bike. They are mostly concerned with how far they can go on a battery charge and how fast.

By law, electric bikes must have no more than 1 horsepower and go no faster than 20 mph (on motor power alone).

Basically they are much like traditional bicycles with small motors that power the bike or assist a rider with pedaling. Many have gears like a regular bike.

"It's just adding the throttle aspect, other than that it handles like a regular bicycle," Keith Felch said. He says he uses the throttle all the time, choosing one of two modes -- eco [half power] or fast [full power].

He says he once tried a regular bike for his 4 ½-mile ride to one of his music studios where he teaches jazz improvisation.

But the hills nearly got him.

He calls his electric bike a "hill eraser."

It also makes the ride to his farthest studio -- 22 miles away -- seem much closer. He says he gets about 35 miles on his primary battery and has an additional one for long rides.

But as they tout the virtues of electric bikes, advocates also realize that there will have to be a shift in the way Americans view them before they become as popular as they are in Europe or China.

"There are two possible sides to the equation," Roseman said. "One would be a change in the way people view transportation. There are still a lot of SUVs out there. ... People still have a hard time thinking about riding a bicycle unless they are 10 years old, it seems. So there needs to be a little shift in mentality."

"But having said that, I think there is a growing awareness about health and transportation and environmental issues so it could be that we are just reaching a juncture where things will change [for e-bikes]."

Some view them as expensive or poor quality or uncomfortable. And Meyers admits, e-bikes are not for everybody.

As Roseman says, people who live in Spandex will probably always prefer a really good road bike and hard-core city cyclists may well stick to their fixed-gear bikes.

Meyers says Ultra, which sells its bike for $2,700, isn't for those kinds of people.

The Felches say taking a test drive will change a skeptic's attitude.

"If you ride one, it will blow your mind," Keith Felch says. "When you get on one it's like being in a flying dream you've had. It's like everything you've dreamed your bicycle should do in your wildest dreams -- it's doing it."

All About Transportation • Alternative Energy Technology