(CNET) -- Hoping to capitalize on the momentum created by the release of its Pre smartphone, Palm on Wednesday will unveil a smaller, cheaper smartphone called Pixi. 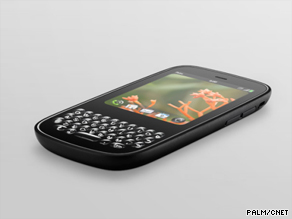 The Palm Pixi phone is expected to be cheaper than the Pre and available for the holiday shopping season.

Apparently geared toward younger consumers than those targeted by the Pre, the playfully named smartphone will be longer but slimmer than the Pre and will sport a smaller multitouch screen, a full QWERTY keyboard, and a 2-megapixel camera, Palm said.

However, like its smartphone sibling, the 3.5-ounce Pixi will still have 8GB of memory and GPS capabilities.

In addition to a new Facebook application, the Pixi will also be able to integrate LinkedIn contacts and Yahoo contacts, calendar, and IM in a single view via Palm's Synergy feature.

"Palm Pixi brings this unique experience to a broader range of people who want enhanced messaging and social networking in a design that lets them express their personal style."

The announcement of the Pixi comes less than four months after Palm began selling the Pre, which the company said registered record sales when it became available in June. The company did not discuss specific numbers that first week, but some analysts estimated that between 50,000 and 100,000 units were sold during the first weekend.

The move coincides with an announcement that Palm would drop the price of its Pre smartphone to $150 with a two-year service agreement and two rebates. Palm did not reveal the Pixi's price but did say it would be less than that of the Pre and that it was expected to be available to consumers in time for the holiday shopping season through Sprint.

Palm also plans to offer artist-designed, limited edition replaceable back covers, which it plans to showcase at the Mercedes-Benz Fashion Week in New York, which starts Thursday.

On Tuesday, Sprint kicked off a short-lived promotion that offered customers of competing carriers a $100 service credit to anyone who bought a Palm Pre and ported his or her old number to Sprint. However, the offer was pulled after a few hours with Palm saying that it was posted in error.