The future of libraries, with or without books

(CNN) -- The stereotypical library is dying -- and it's taking its shushing ladies, dank smell and endless shelves of books with it. 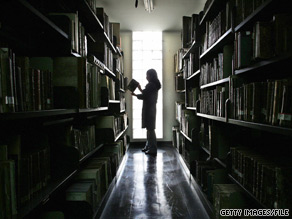 Libraries are trying to imagine their futures with or without books.

Books are being pushed aside for digital learning centers and gaming areas. "Loud rooms" that promote public discourse and group projects are taking over the bookish quiet. Hipster staffers who blog, chat on Twitter and care little about the Dewey Decimal System are edging out old-school librarians.

And that's just the surface. By some accounts, the library system is undergoing a complete transformation that goes far beyond these image changes.

Authors, publishing houses, librarians and Web sites continue to fight Google's efforts to digitize the world's books and create the world's largest library online. Meanwhile, many real-world libraries are moving forward with the assumption that physical books will play a much-diminished or potentially nonexistent role in their efforts to educate the public.

Some books will still be around, they say, although many of those will be digital. But the goal of the library remains the same: To be a free place where people can access and share information.

Think of the change as a Library 2.0 revolution -- a mirror of what's happened on the Web.

People used to go online for the same information they could get from newspapers. Now they go to Facebook, Digg and Twitter to discuss their lives and the news of the day. Forward-looking librarians are trying to create that same conversational loop in public libraries. The one-way flow of information from book to patron isn't good enough anymore.

"We can pick up on all of these trends that are going on," said Toby Greenwalt, virtual services coordinator at the Skokie Public Library in suburban Chicago.

Greenwalt, for example, set up a Twitter feed and text-messaging services for his library. He monitors local conversations on online social networks and uses that information as inspiration for group discussions or programs at the real-world library.

Other libraries are trying new things, too.

The Public Library of Charlotte and Mecklenburg County, in North Carolina, has a multimedia space where kids shoot videos and record music. It also runs a blog dedicated to gaming and hosts video game tournaments regularly.

Kelly Czarnecki, a technology education librarian at ImaginOn, a kids' branch of that library, said kids learn by telling their own stories.

"Our motto here is to bring stories to life, so by having the movie and music studio we can really tap into a different angle of what stories are," she said. "They're not just in books. They're something kids can create themselves."

Czarnecki believes that doesn't have to come at the expense of book-based learning.

The library features an "info column," where people share digital news stories; an "info galleria" where patrons explore digital maps layered with factoids; a digital floor that lets people immerse themselves in information; and RFID-tagged book phones that kids point at specific books to hear a story.

"The library has never been just about books," said Rolf Hapel, director of the city's public libraries.

Jason M. Schultz, director of the Samuelson Law, Technology and Public Policy Clinic at the University of California at Berkeley Law School, said libraries always have served two roles in society: They're places where people can get free information; and they're community centers for civic debate.

"It depends on whether we prioritize it as a funding matter, but I think there always will be a space for that even if all the resources are digital," he said.

Some libraries are trying to gain an edge by focusing on the "deeply local" material -- the stuff that only they have, said Blowers, the librarian in Ohio.

"How do we help add that value to a format like the Internet, which is expansively global?" she said. "So we look at what do we have here that we could help people gain access to by digitizing it."

That material can be used to start community discussions, she said.

This shift means the role of the librarian -- and their look -- is also changing.

In a world where information is more social and more online, librarians are becoming debate moderators, givers of technical support and community outreach coordinators.

A rise in a young, library-chic subculture on blogs and on Twitter is putting a new face on this changing role, said Linda C. Smith, president of the Association for Library and Information Science Education.

Some wear tattoos, piercings and dress like they belong on the streets of Brooklyn instead of behind bookshelves. They're also trying on new titles. Instead of librarians, they're "information specialists" or "information scientists."

Libraries like the "Urban Media Space," which is set to open in 2014 in Aarhus, Denmark, are taking on new names, too. And all of that experimentation is a good thing, Smith said, because it may help people separate the book-bound past of libraries from the liberated future.

"It's a source of tension in the field because, for some people, trying to re-brand can be perceived as a rejection of the [library] tradition and the values," she said. "But for other people it's a redefinition and an expansion."

In the United States, libraries are largely funded by local governments, many of which have been hit hard by the recession.

That means some libraries may not get to take part in technological advances. It also could mean some of the nation's 16,000 public libraries could be shut down or privatized. Schultz, of the Berkeley Law School, said it would be easy for public officials to point to the growing amount of free information online as further reason to cut public funding for libraries.

Use of U.S. public libraries is up over the past decade, though, and many people in the information and libraries field say they're excited about opportunities the future brings.

"I came into libraries and it wasn't about books," said Peter Norman, a graduate student in library and information science at Simmons College in Boston who says he's most interested in music and technology. "Sure I love to read. I read all the time. I read physical books. But I don't have the strange emotional attachment that some people possess."

"If the library is going to turn into a place without books, I'm going to evolve with that too," he said.