(CNN) -- Starting Tuesday, many "robocalls" from telemarketers will be illegal. 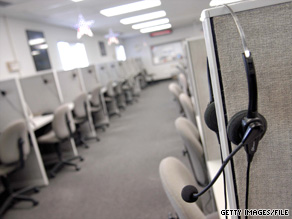 Businesses that try to push products on consumers with automated and unsolicited calls will face fines of up to $16,000 per call, according to the Federal Trade Commission.

"American consumers have made it crystal clear that few things annoy them more than the billions of commercial telemarketing robocalls they receive every year," FTC Chairman Jon Leibowitz said in a news release.

Calls from politicians, public service announcements and "informational" calls will be exempt from the new rule. A call alerting a traveler that his or her flight has been delayed would still be allowed, for example.

Banks, telephone carriers and most charitable organizations are also excluded from the ban, the FTC says.

The FTC asks people to report questionable robocalls by visiting its complaint Web site or by calling 1-877-FTC-HELP.

"If consumers think they're being harassed by robocallers, they need to let us know, and we will go after them," Leibowitz said.

The ban on many pre-recorded calls was approved by the FTC in August of 2008 and is the last of a series of amendments to go into effect, said Lois Greisman, the FTC's associate director of marketing practices.

She said the ban applies only to pre-recorded calls and encouraged consumers to sign up for the federal "do not call" registry for additional protections.

Robocalls to mobile phones already are illegal, she said.

People still will be able to receive telemarketer calls if they give companies written permission to contact them.

Nate Anderson, a blogger at Ars Technica, a technology site, cheered the amendments but said many calls are illegal even without the new amendments.

"Most of the robocalls received by people in the office here are already illegal to do begin with -- pitches for time shares and bogus car warranties top the list of such calls," he wrote.