NEW YORK (CNN) -- Her identity revealed, a blogger who posted rants about model Liskula Cohen said she was the real victim in the case and plans to sue Google for violating her privacy. 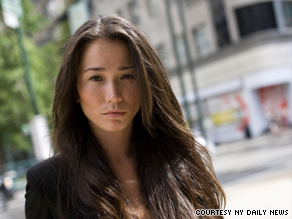 Rosemary Port says she plans to sue Google for not doing enough to protect her identity.

Rosemary Port and her lawyer said Monday that they will file a $15 million lawsuit against the search engine giant for not doing enough to protect her identity.

"I not only feel my client was wronged, but I feel now it sets precedent that anyone with money and power can get the identity of anyone that decides to be an anonymous blogger," said Salvator Strazzullo, Port's lawyer.

"I wanted it gone," Cohen said. "I didn't want it to be there for the rest of my life. And I knew the only way for it to be gone was to call my lawyer."

In August 2008, Port, a user of Google-owned Blogger.com, created "Skanks in NYC." The site assailed Cohen, 37, a cover girl who has appeared in Vogue and other fashion magazines. The blog featured photos of Cohen accompanied by derogatory terms.

The judge rejected Port's argument that blogs on the Internet "serve as a modern-day forum for conveying personal opinions" and should not be regarded as fact.

"Her being a victim here? I have trouble understanding that in its entirety," he said.

Legal experts said Port is not likely to win her case.

Jeffrey Toobin, CNN's senior legal analyst, said Google was complying with a court order and that disclosing Port's name cannot be viewed as violating her rights.

"Google never promises anyone absolute anonymity," Toobin said. "There are all sorts of circumstances when Google cooperates with law enforcement."

In response to CNN's request for an interview, Google issued a statement:

"Google does comply with valid legal processes, such as court orders and subpoenas, and these same processes apply to all law-abiding companies. At the same time, we have a legal team whose job is to scrutinize these requests and make sure they meet not only the letter but the spirit of the law."

Nick Thompson of Wired magazine said the case will force people to recognize that the blogosphere, however anonymous, is not above the law. On the other hand, it could deter some bloggers who fear the cloak of anonymity could be lifted at any moment.

"There will be people who won't publish things that maybe they should publish or that would be good for society," Thompson said.

All About Google Inc. • WIRED Magazine