NEW YORK (CNN) -- One of the largest Internet search engines is being accused of violating both federal and state laws by accepting advertising from online pharmacies it should have known were selling drugs without valid prescriptions. 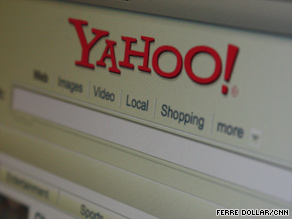 The report said Yahoo should have known these sites do not require valid prescriptions.

Two small research firms, Legitscript.com and KnujOn.com, say that during a three-month period in the spring and early summer of 2009, Yahoo routinely accepted ads from dozens of online pharmacies that dispensed drugs without a valid prescription.

The allegation is included in a new report by the two firms, which said their researchers used "blind" buys -- purchases made without disclosing their identities -- to obtain a wide range of prescription drugs from nearly a dozen online pharmacy sites that advertised on Yahoo. The researchers, the companies said, often had real-time interaction with online pharmacy employees.

"If search engines continue to knowingly facilitate illegal prescription drug sales, then we will continue to issue these reports," said Garth Bruen, president of KnujOn.com.

The two companies earlier accused the new Microsoft search engine Bing of similar practices. Bing said it had followed all "acceptable" practices and would increase security on its search engine.

Researchers from the two companies say they were able to buy drugs such as Ambien, Tramadol and Soma -- along with a range of others -- merely by filling out an online form. They received the drugs within a day or two, the companies reported.

Both Yahoo and the other major Internet search engine, Google, use a firm called PharmacyChecker.com to verify that drugs are dispensed legally. But this week's report said even with that protection, drugs were purchased with ease.

Google has not been mentioned by the two firms as a search engine that accepts ads from rogue pharmacies.

But John Horton, president of Legitscript.com, said more than 80 percent of Yahoo's Internet pharmacy ads "were operating contrary to federal and state laws."

In one instance, a researcher from the firm asked a representative from "Pharmacybuycheap.com" whether he needed a doctor's prescription for Tramadol, a powerful muscle relaxant which has been known to be addictive.

"No, you do not need a prescription from a doctor," came the reply, according to the report.

CNN attempted to reach a representative of "Pharmacybuycheap.com," but the company did not return requests for comment by phone or e-mail.

In an e-mail to CNN, a spokesperson for Yahoo said the company has "strict guidelines and policies in place" for all search advertising and, "All known violators are removed from the Yahoo network."

"In addition, we have implemented a number of protective measures to protect the marketplace, including a more robust manual review process," the statement said. Online pharmacies wishing to advertise on Yahoo must undergo a "rigorous" review by PharmacyChecker, and companies that do not pass that review "may not participate in Yahoo's search marketing program."

"As this report illustrates, the online pharmacy marketplace is challenging to police," Yahoo said. "However, we take swift action when we become aware of violators and we have a number of safeguards in place to protect our advertisers and users."

In 2008, CNN aired several stories documenting rogue online pharmacies that dispensed prescription drugs without a valid doctor's authorization. CNN was able to order the powerful anti-depressant Prozac by simply filing in a form and pressing a button, and the drugs arrived via express mail the next day.

Kansas authorities are prosecuting a rural pharmacy that sent the muscle relaxant Soma to a Wichita man who eventually committed suicide by ingesting dozens of Soma pills. The drugs came from the pharmacy via an online site.

Mark and JoLane Poindexter face felony counts of computer crime, conspiracy to commit computer crime and commercial bribery, along with misdemeanor violations of Kansas pharmacy laws. The state closed their drugstore in Lyons, northwest of Wichita, in March 2008.

Rick Cloxin, their former chief pharmacist, has pleaded no contest to 14 misdemeanor counts and is awaiting sentencing.

All About Online Advertising • Yahoo! Inc.