(CNN) -- The answer to easing the energy crunch in one of the nation's most populous states could lie underwater. 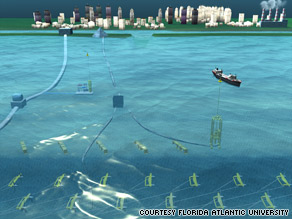 Sea turbines make electricity which moves via cable, left, to shore. A hydrogen by-product is collected on a ship.

Imagine if your utility company could harness the ocean's current to power your house, cool your office, even charge your car.

Researchers at Florida Atlantic University are in the early stages of turning that idea into reality in the powerful Gulf Stream off the state's eastern shore.

"If you can take an engine and put it on the back of a boat or propel a ship through water, why not take a look at the strength of the Gulf Stream and determine if that can actually turn a device and create energy?" asked Sue Skemp, executive director at Florida Atlantic University's Center for Ocean Energy Technology.

The demand for energy in Florida -- the fourth most populous state, with an estimated 19 million residents -- is quickly outpacing the capacity to create it, according to experts.

Watch how the proposed ocean turbines would work »

"Right now in Florida, we are at the cusp of an energy crisis. Our energy demand keeps growing," said Frederick Driscoll, director of Florida Atlantic University's Center of Excellence in Ocean Energy Technology.

Beginning in the Caribbean and ending in the upper-North Atlantic, the Gulf Stream lies on the eastern shore of Florida.

Its powerful currents have been used by many fishermen, sailors and explorers to expedite their passage in the Atlantic north and east to Europe, but scientists say the energy within its currents could propel Florida out of its potential energy crisis, powering 3 million to 7 million Florida homes -- or supplying the state with one-third of its electricity.

"The predictions at this point estimate that the strength of the Gulf Stream could generate anywhere between four to 10 gigawatts of power, the equivalent of four to 10 nuclear power plants," said Skemp.

"The Gulf Stream is the strongest current in the world, so we want to harness our greatest resource. It's renewable, emission free and reliable," said Jeremy Susac, executive director of the Florida Energy and Climate Commission.

At the university's Center for Ocean Energy Technology in Boca Raton, Florida, ocean engineers are working with marine, environmental and material scientists to develop cost-competitive technologies to commercialize the energy within the Gulf Stream.

Though it has been considered for more than a century, harnessing the energy of the Gulf Stream is no easy task, and no sustainable system has been implemented.

"First we have to do a resource assessment and understand how much energy is in the Gulf Stream current on a minute-to-minute, day-to-day, hour-to-hour and yearly basis," said Driscoll.

In April, researchers at the center deployed four acoustic Doppler current profilers in the Atlantic off the east coast of Florida.

"We are looking at how much energy we can safely extract -- what is the sensitivity of extraction versus the environmental effects?" said Driscoll.

The vision for the pilot program is to develop and test a 20-kilowatt underwater turbine by spring 2010.

The concept behind underwater turbines is similar to that of wind turbines on land.

As water flows by the turbine, it turns a rotor blade. As the rotor blade turns, energy is generated.

That energy can be transmitted from a generator inside the turbine to electrical conducting cables, where it's captured, harnessed and distributed for future use.

Researchers also are looking at ways to use the electricity that is generated underwater to generate and store hydrogen in the ocean. The hydrogen could be used to fuel clean-running cars and trucks.

"Because it's such a new endeavor, there's a lot of knowledge gaps not only in terms of the technology side but also on the ecological side of things," said Driscoll.

Florida is completely reliant on out-of-state fuel sources (coal and natural gas), but generates more than 90 percent of its own electricity, according to the Florida Energy and Climate Commission. It ranks third nationally in total energy consumption.

So how much will this endeavor cost? And what kind of impacts will it have on the local marine environment?

"Those are the questions we don't have answers to," said Skemp.

There are some hurdles that need to be cleared before the technology can get approval and become commercially available.

"This area is so new, we're still finding out what needs to be done," said Skemp.

"It's not like an established industry, like the aerospace industry or the automotive industry or others, where you have models which you could base cost on," added Skemp.

So far, the state of Florida has allocated $13.75 million in grants toward research and development of the pilot project, but the cost to implement the project on a large scale could be much higher.

Before a project like this can go forward, the Federal Energy Regulatory Commission will have to look at a whole range of factors, from the effects it will have on wild and marine life to recreation activities and shipping, said an environmental specialist with the commission.

If the pilot program is successful, it could take another five to 10 years before the technology can be implemented.

The Gulf Stream is something that has been taken for granted, said Skemp.

All About Alternative Energy Technology • Florida