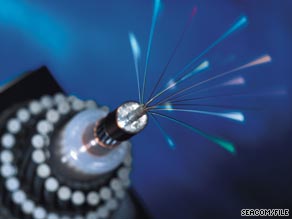 The cable links southern Africa to Europe and Asia.

Most Africans rely on expensive and slow satellite connections, which make the use of applications such as YouTube and Facebook extremely trying.

"This is going to reduce the cost of doing business in Africa, within Africa and with international parties" said Suveer Ramdhani, SEACOM spokesman in South Africa.

"The cable is as thin as a hair strand, and in one second it can download the same amount of data that 160 people use in a month."

It has taken less than three years to complete the mammoth project, providing landing stations at South Africa, Kenya, Madagascar and other points along the east coast of Africa.

But telecoms analyst James Hodge said that some of the more ambitious hopes for the system -- such as impacting the continent's socioeconomic problems -- will be long-term, and that initially it will be those already connected who will see the benefits.

The launch was delayed by a month because of increased activity by pirates along parts of the African coast.

Security teams were beefed up to protect the slow moving cable layers.

Neotel, a South African communications network operator, is the largest SEACOM customer in South Africa and is the country's landing partner, providing both the coastal landing station and Johannesburg data center for the submarine cable.

Neotel managing director Ajay Pandey is excited about the opportunities for growth presented by the SEACOM cable.

"With this cable coming in, the pipe size opens up, so more and more people are able to get faster and better connectivity, hopefully at a lower price. It can't be more expensive than what it is today."

SEACOM Chief Executive Officer Brian Herlihy added: "Turning the switch 'on' creates a huge anticipation, but ultimately, SEACOM will be judged on the changes that take place on the continent over the coming years."

South Africa has been hobbled by high costs and extremely slow bandwidth, effectively keeping the country on an information back road rather then the superhighway.

There is much anticipation and hope that the cable will ensure Africa keeps up with the developed world in Internet connectivity, providing greater speed, flexibility and, potentially, a complete socioeconomic transformation.

Tanzanian President Jakaya Kikwete said in his opening address: "It's the ultimate embodiment of modernity."

His speech was beamed via SEACOM from a launch in Dar es Salaam, Tanzania, to the simultaneous launch in Johannesburg, South Africa.