Brad Pitt: Don't chat at the urinal; text instead

(CNN) -- Need some social etiquette advice for the digital age? Brad Pitt's got your back in this month's cover story from Wired Magazine. 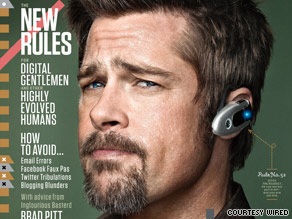 So Brad, should people talk on the phone while they're using the restroom?

"No, you can't talk on the phone!" Pitt tells the magazine. "Do you want the guy next to you to hear your entire conversation?

"That's why you should only text in the bathroom. Just be sure you don't hit the wrong button and end up putting a photo of your junk on Twitter. Trust me, you don't want those followers."

Humor covers for Pitt's lack of tech credentials as the Hollywood hunk and star of Quentin Tarantino's new film, "Inglourious Basterds" offers up a range of tongue-in-cheek advice for Wired readers.

Wired says Pitt approached the magazine with ideas for the story. The magazine, which is owned by Conde Nast and is a CNN.com content partner, collaborated with Pitt and contributing photographer Dan Winters to create the article.

"How to Behave: New Rules for Highly Evolved Humans" hits newsstands July 21. Wired said in an e-mail that the piece is a re-think of the celebrity magazine profile.

On the cover, a photo shows Pitt wearing a Bluetooth device in his ear.

"Rule No. 52: Ditch the headset. He can barely pull it off -- and you are not him," a blurb on the magazine front says.

Most of the article is delivered in a spoof question-answer format. Pitt contributes several answers, as do regular Wired writers.

One question asks if a person who exaggerated his or her salary on an online dating profile should confess.

"Hell no," Pitt writes. "Everyone lies online. In fact, readers expect you to lie. If you don't, they'll think you make less than you actually do. So the only way to tell the truth is to lie."

A question about viewing pornography at work is paired with a photo of Pitt scanning a copy of Hustler magazine at an office desk. A half-eaten doughnut sits on the table in front of him.

"It may be a brief interruption -- just a few seconds -- but what if someone sitting near you is trying to make a decent bootleg? Did you ever think of that? Now all those street-corner copies are permanently defiled by your so-called 'emergency,' " he writes. "Don't be so damn selfish."

All About Brad Pitt