(CNET) -- Nokia and Sony Ericsson are targeting the U.S. with a new set of unlocked phones. But without hefty carrier subsidies, will they ever be able to crack the U.S. market? 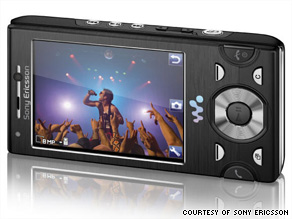 There's no question that when it comes to features, Nokia and Sony Ericsson's new U.S.-ready phones can easily compete against the hottest new phones on the market.

Nokia's N97, a touch screen phone that supports both 3G and Wi-Fi, has a 5-megapixel camera and 32GB of memory. It's a clear competitor to the new Apple iPhone 3G S and the Palm Pre.

The Sony Ericsson W995a, also a 3G and Wi-Fi enabled phone, comes with an 8.1-megapixel camera, a brilliant display screen, a good media player and features such as stereo Bluetooth, and GPS. In terms of features and functionality, this phone could easily compete with other high-end feature phones like the LG enV3, which is sold by Verizon Wireless or the Samsung Memoir T929, sold for T-Mobile USA's network.

But even though these phones may have the features to compete, they're not sold through a wireless operator, which means that they are not subsidized, making them too expensive for most mainstream customers. The N97's suggested retail price is $700, and Sony plans to start selling the W995a for $600.

Meanwhile AT&T charges $99 for the 8GB iPhone 3G, $199 for the 16GB iPhone 3GS, and $299 for the 32GB iPhone 3GS. In exchange for the subsidy, AT&T requires that customers sign a two-year service contract. The price of the service, which includes voice and data services, is a minimum of $70 per month. But regardless of whether a device is subsidized, users will have to purchase some kind of voice and/or data plan, depending on the type of device they buy.

"In the U.S. market, price is a huge factor in determining which phones people buy," said Will Stofego, an analyst with the market research firm IDC. "Why pay $500 or more for a phone when you can get an iPhone for $100? Of course you have to agree to the two-year service plan, but I think that's a trade-off most consumers are OK with."

Up until recently, unlocked phones--handsets that can be used on multiple carrier networks--were only available in "gray" markets where Americans bought phones from overseas. Now manufacturers are selling them on their Web sites, in their own retail stores, and through some big retail chains, such as Best Buy. Nokia has opened several retail stores in the U.S. And Sony Ericsson sells unlocked phones through Sony Electronic retail channels.

As part of their push to address the U.S. market, Nokia and Sony Ericsson are also making sure that the phones they sell in the U.S. operate in the frequency bands used by AT&T and T-Mobile, the two main GSM carriers in the U.S. While these operators have built GSM networks just like carriers in Europe and parts of Asia, not all GSM networks operate on the same frequency, which means that some unlocked GSM phones bought in Europe or Asia won't work in the U.S. on a GSM network.

Another benefit to buying a U.S.-friendly unlocked phone is that Sony Ericsson is now offering warranties for customers who buy their U.S. unlocked phones through a Sony retail channel. The company doesn't offer a warranty for phones designed for other countries and brought to the U.S. through the gray market.

There are several reasons for this difference. For one, two of the four big nationwide U.S. cell phone operators in the U.S. use CDMA, which does not use SIM cards that can be interchanged between phones. Most of the world's cell phone carriers use GSM, which does allow for SIM cards. And because people buy unlocked phones in order to swap out SIM cards to use on other carrier networks, phones made by manufacturers such as Nokia and Sony Ericsson, which have concentrated efforts on developing GSM phones, can only be used on two of the big four nationwide wireless networks in the U.S.: AT&T and T-Mobile.

But the biggest reason that unlocked phones haven't taken off in the U.S. is that they are much more expensive to buy than locked phones that are subsidized and typically require a two-year service contract.

"Unlocked phones aren't for every consumer," he said. "They are really for the phone junkies; the geeks. It might seem crazy to some people that someone would drop $600 or $700 on a phone. But you'd be surprised at how many actually do."

Medina said a lot of the people buying unlocked phones either frequently travel internationally, or they have lived in Europe and Asia where people typically buy unlocked phones at full retail price. For these consumers, Medina says the benefits of an unlocked phone far outweigh the hefty price tag.

The biggest benefit of an unlocked phone is that users can simply pop in SIM card to get service. And unlike GSM phones bought through U.S. operators, these phones don't require a special unlock code to be able to swap SIM cards.

Medina says that's an important distinction, because when wireless subscribers from AT&T and T-Mobile unlock their phones, the locking software is still on the phone. The code that is used to unlock the device simply overrides that software. What this means is that when phones are updated, they can be relocked, forcing consumers to once again override the lock code.

Another big benefit of buying an unlocked phone is that all the features that the manufacturer has included on the phone will work. U.S. cell phone carriers sometimes disable some functionality on phones that they sell. And with many phones, they often integrate their own software and branding onto the phone.

And when a carrier upgrades its network and sends out an automated update to phones on the network, unlocked users must handle the updates on their own. And if there is ever a problem with the phone or the service, an AT&T or T-Mobile service representative may not be able to help because he or she isn't trained to deal with these specific phones.

While Sony Ericsson's Medina acknowledges that it's unlikely that the unlocked market will grow with respect to the overall cell phone market in the U.S. right now, he believes that eventually more U.S. consumers will buy unlocked phones.

"We believe that at some point, the U.S. market will become more like the European and Asian markets where unlocked phones are the norm," he said. "The U.S. wireless market will eventually evolve from a carrier-led market to one that is more open. And consumers will select a phone and then select a carrier."

"The problem in the U.S. is that people have been trained to buy on price," Stofega said.

Government intervention looming? But not all hope is lost for Sony Ericsson and Nokia in their quest to crack open the unlocked cell phone market in the U.S. These companies may get a little help from the government. Congress and the Federal Communications Commission are already investigating exclusive deals made between wireless carriers and handset makers. And some officials are even questioning the carrier practice of disabling certain features.

It's difficult to say if either the FCC or Congress will actually do something to limit this practice, which could help open up the unlocked market. While a move like this would certainly increase choice for consumers, it could also drive up costs for consumers. Given this consequences and the fact that the phone companies have a strong lobbying organization in Washington, it seems unlikely that government intervention will happen any time soon.

That said, the government has imposed unpopular rules on the phone companies previously. For example, wireless phone companies are now required to allow consumers to take their phone numbers with them when they switch carriers, which was a move that was initially highly unpopular with carriers.

The best solution for cracking the unlocked phone market is for phone manufacturers to develop new business models that will keep consumer costs low, but still reward carriers and phone manufacturers. Medina suggests that Sony Ericsson could subsidize the cost of its phones by charging for mobile games and applications. This is a model that has worked well in the game console market. And there are already indications that consumers are hungry for mobile applications. The success of Apple's App Store is proof of that.

But again price is a big factor in the success of such a plan. Through the App Store, consumers are already being conditioned to get applications for free or for 99 cents.

"Right now unlocked phones will likely not appeal to the mainstream market," Sony Ericsson's Medina admits. "Whenever you have a subsidized model, it is always going to be cheaper to buy a subsidized product. But there are different ways to address this, and we think right now we have a strong offering for hard core cell phone enthusiasts, who want the flexibility of an unlocked phone. But we are also looking at other revenue streams to subsidize unlocked phones."