(CNN) -- An avid Twitter user, Alana Taylor wrote a song about the social networking site and uploaded it to YouTube last April. Soon, her Twitter feed became flooded with messages linking to it. 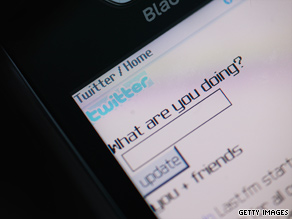 "'Everyone was like, 'RT: Alana Taylor's Twitter song,' " said Taylor, 21, a student at New York University and marketing manager at OneTXT. "It just spread, and a lot of it had to do with retweeting."

Retweeting, represented on Twitter with the symbol "RT," means a user has taken someone else's tweet -- or message -- and copied part or all of it. The original author is often credited through the convention "@username," although sometimes the true source gets lost as messages spread further.

Apart from being used to share amusing links such as Taylor's video, retweeting has taken on a powerful role in political activism. Many young protesters in Iran have used Twitter to organize demonstrations against the results of the recent election, and the words, photos and videos of people on the ground in the country have spread globally through retweeting.

A video of a dying woman in Iran, known only as "Neda," has been shared and mentioned so much in tweets and retweets that the name has been a "trending topic" on Twitter since Saturday.

One frequent user who has retweeted videos from Iran is Kyle Aevermann, 22, from Itasca, Illinois. Generally the retweets he receives in his feed can be humorous or even "bizarre," but lately there's been a lot of news, especially regarding Iran, he said.

"Sometimes it's a good way to just get information out since not everyone is following the same people, so it kind of, like, expands who you're following in some ways," Aevermann said.

1. Begin with the letters RT. Don't waste valuable characters (you've only got 140) with preambles such as "Retweet."

2. Give credit to the source of the tweet by using @author, where "author" is the Twitter username of the person you are referencing. Sometimes there will be multiple names attached because it's been passed along so many times; make sure you are keeping the original source if you trim the chain of users.

3. When linking to something, shorten the URL you are referencing through a tool such as http://ow.ly or http://is.gd.

4. Use the remaining characters to explain the point of view or the link in the original tweet, preserving the spirit of what the source said.

5. Think twice before retweeting sensitive material or information that may be untrue. You don't want to embarrass people or spread lies.

6. Think about whether what you retweet will have relevance to any of your followers before posting. And avoid spam -- it's all over the Web.

Retweets about Iran are a prime example of how the act of passing on someone else's tweet combines elements of broadcast media and person-to-person interaction, said Dr. Nicholas Christakis, an internist and sociologist at Harvard University and author of the forthcoming book "Connected: The Surprising Power of Our Social Networks and How They Shape Our Lives."

Information goes out to a lot of people, like a newspaper, but only to a select group of people -- "followers" -- who will likely be interested in it, he said.

"Retweeting tends to segment the market and reach those individuals who are most likely to be responsive to the information," Christakis said.

Retweets are also gaining traction in the search engine world. A new tool called Topsy is powered by tweets and shows the Twitter users considered most "influential" about topics; users get more influence the more their links get retweeted. "So, yes, retweets are the new currency on the Web," Michael Arrington wrote last month on TechCrunch, his popular industry blog.

One of the central forces of social networks such as Twitter and Facebook is the way these services make users "feel like the center of a social universe," said Daniel Berdichevsky, editor of the forthcoming book "The Psychology of Facebook," in an e-mail.

The label "followers" on Twitter makes users feel like "leaders," and puts extra pressure on users to both lead and matter to other people -- which is where retweeting comes in.

"You're leading people to something that you think is valuable for them -- the online equivalent of a watering hole or fresh prey," he said. "And you're mattering because your re-tweet presumably gives them something they lacked and wanted."

Fundamentally, it's not all that different from the way people behave away from their computers, he said. People often suggest restaurants to each other, partly because they want friends to enjoy good meals, but also because they receive gratitude for the recommendation, and want to keep the restaurants in business.

Similarly, when people speak in person, they'll often ask each other if they've watched particular television shows or seen certain Web sites, which happens on Twitter all the time, said Graham Jones, a psychologist and consultant who specializes in the way people use the Internet, in an e-mail.

Online interactions play into "ancient proclivities," such as the desires to connect with others and pass along gossip, Christakis said.

Retweeting may resemble the phenomenon of forwarding stories, links, or received messages to everyone on your e-mail address list, said Richard Sherman, professor emeritus of psychology at Miami University in Oxford, Ohio. Like retweeting, there is the intimacy of "psst -- here's something you MUST see" mixed with the impersonal nature of mass communication, he said.

Motivations behind retweeting include info, ego, identity and amusement, said B.J. Fogg, founder of the Stanford Persuasive Technology Lab, who researches how computers change people's thoughts and behaviors, in an e-mail. By retweeting, people seek to inform others, make themselves look smart and well-connected, express who they are and what they believe, and entertain others, he said. These are the same reasons why people clip articles and post bumper stickers, said Fogg, who is also co-editor of "The Psychology of Facebook."

Retweeting also promotes reciprocity, experts said. The more you retweet someone else, the more likely they will be to reference you also. People also believe retweeting will help them get more followers or more attention to their own Twitter feeds, Jones said.

Of course, retweets don't always make sense, and the constant stream of them can get annoying, users say.

Still, Taylor, who has accumulated more than 5,000 followers and is disconnected from Twitter only while sleeping, appreciates the "viral" aspect of retweeting.

"The coolest thing about retweeting is that, if you say anything that might be valuable, it spreads like wildfire," she said.