NASA orbiter on way to explore the moon

(CNN) -- Humans are a step closer to returning to the moon after NASA launched a lunar orbiter Thursday to provide a comprehensive survey of our nearest celestial neighbor. 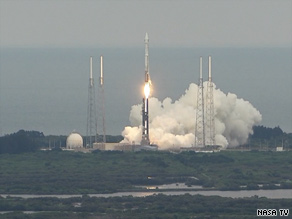 A rocket-propelled lunar orbiter lifts off from Florida's Cape Canaveral Thursday on its way to the moon.

The Lunar Reconnaissance Orbiter lifted off aboard an Atlas V Rocket from Cape Canaveral in Florida at 5:32 p.m. ET, powered by two liquid-fueled engines and a pair of solid-fueled boosters.

NASA described the liftoff as "flawless" on its Web site.

It is the first mission in NASA's plan to return to the moon, then travel to Mars and beyond, NASA said. The data that the orbiter collects and sends back to Earth will be used to build an eventual lunar outpost, NASA said.

Watch the orbiter head to the moon »

The orbiter will send back all kinds of data, from day-night temperature maps to color imaging and UV reflection, NASA said. There is particular emphasis on areas of the moon that may have continuous access to sunlight and where water may exist.

Because building a lunar outpost implies extended periods on the moon's surface, NASA is hoping the orbiter can help it identify safe landing sites and moon resources, and how the lunar radiation environment would affect humans.

The orbiter's trip to the moon will take about four days. It will then spend at least a year in a low polar orbit around the moon, eventually orbiting about 50 kilometers (31 miles) above its surface, NASA said.

The orbiter will have six instruments aboard, including the Cosmic Ray Telescope for the Effects of Radiation -- called CRaTER -- to characterize lunar radiation and its potential biological impacts.

It will also have instruments to do thermal and ultraviolet mapping. Some of the instruments will look for surface ice and frost, and one will be able to search for water below the surface.

The Lunar Orbiter Laser Altimeter will measure the slope of potential landing sites and the roughness of the moon's surface, and generate a high-resolution 3-D map of the moon.

Though not quite as high-tech as the orbiter and its on-board instruments, the mission also has its own Twitter page to allow those on Earth to monitor its progress.

"The return to the Moon will enable the pursuit of scientific activities that address our fundamental questions about the history of Earth, the solar system and the universe -- and about our place in them," NASA said.

"It will allow us to test technologies, systems, flight operations and exploration techniques to reduce the risk and increase the productivity of future missions to Mars and beyond. It will also expand Earth's economic sphere to conduct lunar activities with benefits to life on the home planet."

All About NASA • Space Technology