(CNN) -- The "black box" is actually an orange cylinder -- about 13 pounds of metal wrapped around a stack of memory chips and designed to withstand the force of being slammed high-speed into a brick wall. 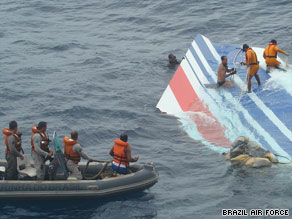 One such device -- possibly sitting more than two miles below the surface of the Atlantic Ocean -- is the object of a massive international search and could hold the answer to why Air France Flight 447 mysteriously plunged into the sea off the coast of Brazil last week with 228 people on board.

"These record many, many parameters of the flight -- the aircraft, its altitude, even the amount of force that one of the pilots might put on a pedal," John Perry Fish, an underwater recovery expert, told CNN. "It's very important to find these in order to find out what happened to the flight."

In the wake of nearly every air disaster, search and rescue efforts immediately segue into quests for the boxes, which have been in wide use on commercial flights since shortly after World War II.

Actually a pair of devices -- the flight data recorder and a voice and audio recorder -- the equipment records virtually everything about how an airplane is working.

Watch the effort to recover the recorders »

The time of day, air pressure, the plane's speed and altitude, how much fuel a plane has and whether that fuel is flowing properly -- all are recorded by sensors throughout the plane. Functions that can change quickly, such as the position of rudders and flight stabilizers, are checked as often as eight times per second, said Chris Benich, director of aerospace regulatory affairs with Honeywell, the company that made the recorders aboard the Air France flight.

See a timeline of the Air France flight »

Microphones in the cockpit record not just conversations between the pilot and other crew members, but can pick up anything from a loud bang to the sound of a switch being flicked on or off.

"When you put all that together, you can start to back it up to a point where you can see the triggering event, or events, that caused a chain of things to happen," Benich said.

Made of several layers of aluminum, insulation and stainless steel, the devices are designed to survive high temperatures, strong impact and tons of pressure -- like what would be experienced at the bottom of the ocean. There's nothing magical that keeps them together when an entire aircraft has been destroyed, according to Benich.

"It's not as much about the materials as it is about the design," he said.

The exact origin of the term "black box" is unclear -- with some sources citing descriptions of early flight-data recorders and others saying it stems from a generic reference to electronic equipment.

The French nuclear submarine and other vessels now searching for the recorders are focusing on its underwater locator beacon -- a device that sends acoustic pulses, or "pings," to searchers.

The U.S. Navy is contributing two high-tech acoustic devices -- known as "towed pinger locators" -- that will be attached to French tug boats and can search to a maximum depth of 20,000 feet.

The wreckage is believed to be about 15,000 feet deep, amid underwater mountains and mixed in with tons of sea trash. By comparison, the wreckage of the space shuttle Challenger was found in about 1,000 feet of water.

Still, experts like Fish say they're confident the box can be found.

"The pressure is high, but instruments are produced and designed and developed and we currently use them that work at those depths ... ," said Fish, vice-president of American Underwater Search and Survey in Cataument, Massachusetts. "I do think it's possible to find. It's just going to take a little longer and require a greater effort working in this deep water."

The batteries that power the locator beacon are designed to last for about 30 days. But the box is designed to keep its contents safe for much longer.

In January 2007, a Boeing 737 crashed into about 5,600 feet of water off the coast of Indonesia. Recovery crews located the black box about 25 days later but weren't able to retrieve it for about eight months. The data were still intact when it was found.

"I think this will be as challenging a recovery as we've seen," Benich said of the Air France search. "But as long as we know where they're at, we've got some time to go get them."