(CNN) -- Microsoft Corp. on Monday unveiled its answer to the Nintendo Wii. 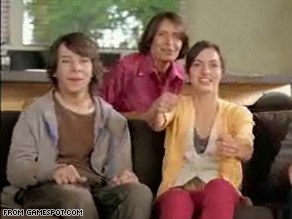 In a promotional Microsoft video, a woman steers a race car while playing a controller-free Xbox gaming system.

The software maker said it will release technology that lets people play video games by moving their bodies instead of clicking hand-held controllers. The service is tentatively called "Project Natal" (pronounced nuh-TALL), and will work with any of the company's Xbox 360 consoles, Microsoft said.

"Before, there was a barrier separating video-game players from everyone else," said Don Mattrick, senior vice president for Interactive Entertainment Business at Microsoft. "Now, with Natal, everyone can join in using the best controller ever invented: you."

Microsoft demonstrated Natal before an audience ahead of E3, a video game and entertainment conference that officially begins Tuesday in Los Angeles, California. The show comes at a time of transition for the video game industry, which once was seen as immune to the economic recession but has been showing signs of slowing.

Traditional games face new competition from developers who engineer video games for phones and distribute them for free online.

Microsoft's Natal doesn't use any controllers, instead it relies on a camera to capture players' movements in a 3-dimensional space. The company says that makes the system more intuitive and appealing to the masses.

The system also recognizes faces, which lets it log players into games automatically. It can identify voices and take commands, as well.

During the demonstration, players swung their legs to kick soccer balls and threw their hands in the air to try to block goals. In a driving game, players put their hands on an imaginary wheel which they turned to steer cars on their television screens. In a painting game, a man said the name of colors -- "blue" or "light brown" -- before swinging his arms to splash paint on a digital canvas.

No launch date was announced for Natal, and its price tag wasn't discussed.

The announcement also comes as Sony and Microsoft are keen to capture the general audiences that are attracted to Nintendo's user-friendly Wii console. Microsoft has been seen as a company that caters to more hard-core gamers.

Hollywood director Steven Spielberg was on hand for the event and said Natal will help reach new audiences who may be daunted by complicated joysticks and controllers.

"The vast majority of people are just too intimidated to pick up a game controller," he said. "Despite the size of the industry, still 60 percent of households do not own a video game console."

The company said the no-controller format will revolutionize the gaming experience. Microsoft also said its facial-recognition software will let video-game characters communicate with players by identifying the emotions on their faces.

The company announced partnerships with the social-networking sites Facebook and Twitter that will allow Xbox LIVE players to post messages about their gaming experiences and send screen shots to their friends in real-time.

Both of those services will be available in the fall, the company said.

The company also announced several new Xbox 360 games, many of them sequels to big-name franchises like "Final Fantasy," "Modern Warfare" and "Halo." The company also unveiled "The Beatles: Rock Band," the newest game in the Xbox Rock Band series, which will be available in September.

The two surviving Beatles, Paul McCartney and Ringo Starr, were on stage for the announcement at the star-studded event. Yoko Ono, widow of Beatle John Lennon, as well as Dhani Harrison, son of George Harrison, also were in attendance.

"It looks similar to a skateboard. It's a little bit shorter, but this thing is full of technology ... It knows where your feet are; it knows where your hands are; you can actually go in for grabs," Hawk said, holding a control skateboard without wheels.

E3, which stands for the Electronic Entertainment Expo, officially kicks off on Tuesday. Announcements are scheduled from Nintendo, Sony, Electronic Arts and other major players in the video game industry.