(CNN) -- When Navy snipers rescued an American cargo-ship captain last month from Somali pirates, it sounded like something from a movie. 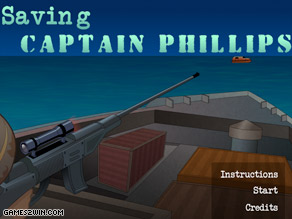 This shooting game by Games2Win.com lets players try to rescue a ship captain from Somali pirates.

But in today's instant-gratification culture, there's no need to wait for Hollywood to re-enact that dramatic high-seas story. Video game developers are already on the case.

Online gaming site Games2Win launched "Saving Captain Phillips," a simple, two-dimensional shooting game, within nine days of the actual rescue. Not to be outdone, Kuma Games followed soon afterwards with "Somali Showdown: Pirates on the High Seas," a PC multiplayer action game that puts players in the middle of a pirate attack on a cargo ship -- and even lets them become one of the pirates.

These are just several of many online and cell-phone games based on recent news events. "Hero on the Hudson," a primitive Flash game, lets people pretend they're pilot Chesley Sullenberger and navigate a plummeting airliner to a safe water landing. A successful attempt brings applause, while a botched landing results in a sinking plane, accompanied by ominous gurgling sounds.

"Baseball Juiced," launched last month with a social message and already played 1.4 million times online, forces batters to pick between using steroids or working out in a gym. In "Swinefighter," gamers seek to save the world from the spread of swine flu. And "Trillion Dollar Bailout" lets players try to boost the economy by awarding government cash to shady corporate fat-cats or struggling homeowners (well, duh).

Such topical, and satirical, games speak to our need for a light-hearted break from serious news, said DigitalTrends.com publisher Scott Steinberg.

"So many events in the news are devastating," he said. "These games are a fun escape. They're good for a laugh, and nobody gets hurt -- unlike in the real world."

The idea to publish games based on news events was inspired in part by the success of viral videos such as JibJab's "This Land," an animated online parody that became an instant sensation during the 2004 presidential election season, said David Williams, who heads up the Nickelodeon Kids and Family Games Group.

"It went around the world like wildfire," said Williams, whose group runs Addicting Games, a teen gaming site that he said had 11.7 million unique users last month. The success of "This Land" signaled that people who got a kick from watching a topical video spoof online might just as easily spend a few minutes playing a similar game.

As several global leaders have discovered, almost any embarrassing episode can be turned into a video game.

Last December's incident at a Baghdad news conference, at which an Iraqi journalist hurled his shoes at then-U.S. President George W. Bush, inspired several games. Out of the United Kingdom came one hastily-published version, "Sock and Awe," which encouraged players to throw shoes at Bush. As of this week, sockandawe.com reports that more than 94 million virtual size-10 shoes have walloped the former leader of the free world.

And as if viral videos of his dozing off at a Group of Seven news conference in February weren't embarrassing enough, former Japanese Finance Minister Shoichi Nakagawa soon had a game to remind him of his slumber blunder.

Translated by a spokesman for the Japanese developer LiveWare Inc. as "Doze off while answering question!," the Flash game for mobile phones challenges players to keep the minister awake long enough to answer reporters. Gamers win points by having Nakagawa answer journalists' questions on time, but the game ends if the minister falls asleep while being asked a question.

More recently, Cellufun, a New York-based company that fosters mobile communities, launched "Made Off," a game that invites online players to outscam businessman Bernard Madoff, who pleaded guilty to defrauding thousands of investors.

"Think you've got what it takes to build a better Ponzi scheme than Bernie?" the site asks. "Always wanted to rob, cheat and steal from innocent investors? Well now's your chance! ... Play as a slimy Fund Manager, a savvy investor, or both."

Some reality-based games hit too close to home, however.

Late last month, publisher Konami killed one controversial game before it was even released. "Six Days in Fallujah" was billed as a documentary-like experience in which players could feel like they were part of the 2004 U.S. campaign against insurgents in the Iraqi city.

Although Iraq War veterans were enlisted as consultants in the game's development, critics accused the publisher of trivializing one of the bloodiest battles of an ongoing war. A Konami spokesperson told CNN he couldn't comment on the matter.

"Traditionally, videogames have focused on fantasy rather than reality, but we believe that they can be a great tool for better understanding our world," explains the site. "We prefer games that encourage critical thinking, even if the player disagrees with our games' ideas."

But most news-related games are simple Flash games that are churned out quickly to capitalize on current events. While amusing at first, they lack the complexity to hold gamers' attention for long, experts say.

"They're not very sophisticated. They're pretty much like home brew ... made by two or three people in their basement for a laugh," said DigitalTrends' Steinberg.

"They're flashes in the pan. They can rack up millions of plays, but three years from now, will anybody still be trying to get the high score on 'Swinefighter?' "

All About Video Games