A South Carolina judge has ordered the state attorney general's office to stop pursuing criminal charges against Craigslist.com while a lawsuit related to prostitution ads on the popular classifieds site makes its way through the courts. 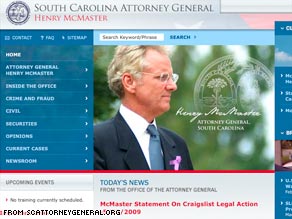 In statements to the media and on his Web site, South Carolina Attorney General Henry McMaster has accused Craigslist's operators of not doing enough to eliminate ads soliciting prostitution in accordance with an agreement struck last November with 40 states attorney generals.

Earlier this month, McMaster sent a letter to Craigslist CEO Jim Buckmaster accusing the site of failing to "install sufficient safeguards" to prevent it from being used "as a vehicle to advertise or solicit prostitution."

McMaster set a deadline of 5 p.m.May 15 to permanently remove portions of the site "allowing for the solicitation of prostitution and the dissemination and posting of graphic pornographic material" or face criminal prosecution.

In response, Craigslist filed a lawsuit on Wednesday seeking to prevent McMaster and his employees from charging the site with crimes related to the ads, claiming that to do so violates Craigslist's First and Fourteenth Amendment Rights.

The site also alleges that McMaster's threats of prosecution violate the Communications Decency Act, which states that no "provider or user of an interactive computer service shall be treated as the publisher or speaker of any information provided by another information content provider."

On Friday, Judge Weston Houck granted Craigslist's request for a temporary restraining order preventing McMaster and his employees from "initiating or pursuing and prosecution against craigslist or its officers and employees in relation to content posted by third parties on Craigslist's Web site" until the court rules on the merits of the site's lawsuit.

Craigslist's lawsuit cites an interview McMaster gave to Fox News on Monday, in which he likened the site "to a hotel or motel owner that knows prostitution is going on on their premises and fails to do anything about it especially after having been told."

The lawsuit contends that, because the site relies on posters for content, McMaster's threats leave Craigslist with no choice other than to shut down its South Carolina section or face criminal prosecution.

In its place, the site established an adult section, where, in addition to the previous measures employed, the ads are also manually reviewed to ensure compliance with the site's Terms of Use, resulting in just 40 ads in the section as of May 18, the lawsuit claims.

"The defensive legal action Craigslist has taken against the solicitors and my office is good news. It shows that Craigslist is taking the matter seriously for the first time," McMaster said in a post on his Web site on May 20, the day the lawsuit was filed.

"Unfortunately, we had to inform them of possible state criminal violations concerning their past practices to produce a serious response. We trust they will now adhere to the higher standards they have promised."

All About Craigslist Inc. • South Carolina