No need to Google 'Engelberth' -- she'll be on the home page

NEW YORK (CNN) -- One of the perks of using search engine Google's home page is checking out the frequently changing seasonal, current-event, and holiday-inspired "doodles" used for the logo. 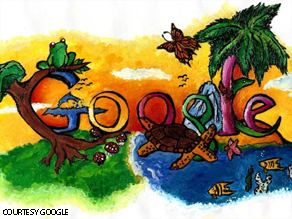 Soon the work of 12-year-old Christin Engelberth will occupy the Google spotlight to be viewed by millions of online searchers worldwide.

On Wednesday, Google announced that Christin, a sixth-grader at Bernard Harris Middle School in San Antonio, Texas, is this year's winner of "Doodle 4 Google," a yearly competition that asks K-12 students to dream up their own variation of the logo. Her work will be featured on Google's main site for 24 hours on Thursday.

The theme of this year's contest was "What I Wish for the World."

"Both our country and the world are undergoing significant change," Google said on the contest's Web pages. At Google we believe in thinking big, and dreaming big, and we can't think of anything more important than encouraging students to do the same."

"A New Beginning," the title of Christin's doodle, depicts the Google logo as a land and sea naturescape intertwined with trees, a frog and leaping dolphin, a curious lizard, a turtle and fish, and a butterfly set against an orange and yellow background with a rising sun represented by the second "O" in "Google."

In an interview with CNN, Christin said she portrayed a dawn as a symbol of a new day. Her wish was that "out of the current crisis, discoveries will be found to help the Earth prosper once more." She added that wanted to portray a brighter tomorrow and "discoveries being made lead to a better Earth for everyone."

Christin said her initial idea for a doodle was for animal conservation, but then she decided "it shouldn't just include animals; it should include the rest of the world."

Christin did check out her competition, and said she thought the other doodles were "much better than mine."

But a panel of independent judges and Google employees, along with close to 6 million online voters, disagreed, and chose her sketch as the overall winner from a field of over 28,000 other submissions.

Google's Marissa Mayer, vice president of search products and user experience, and Dennis Hwang, webmaster manager, said on the Google Blog that Christin's design was part of "a very creative pool of doodles."

As the national winner, Christin will receive a $15,000 college scholarship, a laptop, and a $25,000 technology grant for her school, in addition to having her artwork featured on the Google site.

She was presented with her award at the Smithsonian's Cooper-Hewitt National Design Museum in New York City, where Google also unveiled an exhibit of the top doodles. They will be on display until July 5.

National finalists also were selected in three grade groups. Each will receive a laptop computer.

All winners were treated to a day in New York that Google said "included activities which promote peace, sustainability and wellness -- all inspired by this year's theme." The winners also will participate in a doodling class led by Dennis Hwang and the Google doodle team.

Grand prize winner Christin -- who told CNN she was excited to visit New York City -- said she's been "drawing for as long as she can remember."

When she grows up, she said, she hopes to do "anything to do with art."

All About Visual Arts • Google Inc.