(CNN) -- Part of the power of social networking is the ability to form communities with like-minded individuals. 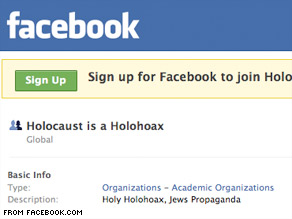 Attorney Brian Cuban is trying to get Facebook to remove pages for Holocaust denial groups such as this one.

But what happens when those communities are offensive to others?

That issue is at the heart of attempts by a Dallas, Texas, attorney to have social-networking site Facebook remove pages for Holocaust deniers.

The Holocaust Denial movement seeks to deny or minimize the Holocaust, in which Nazis killed about six million European Jews during World War II.

Attorney Brian Cuban, brother of Dallas Mavericks team owner Mark Cuban, has been trying since last year to have the pages of groups with such names as "Holocaust: A Series of Lies," and "Holocaust is a Holohoax" removed from Facebook.

He pointed out that Facebook has removed groups based on complaints before and said the site is "setting the subjective standard on what they remove and what they don't."

"There is no First Amendment right to free speech in the private realm," Cuban said. "This isn't a freedom-of-speech issue. Facebook is free to set the standard that they wish."

Facebook spokesman Barry Schnitt said his company is in agreement with Cuban that the Holocaust-denial pages are offensive and objectionable.

Where the two sides part, Schnitt said, is whether people have the right to discuss such ideas on Facebook.

"It's a difficult decision to make. We have a lot of internal debate and we bring in experts to talk about it," Schnitt said. "Just being offensive or objectionable doesn't get it taken off Facebook. We want it [the site] to be a place where people can discuss all kinds of ideas, including controversial ones."

Schnitt said Facebook has drawn the line with pages or groups that attack an individual or incite or threaten violence. Schnitt pointed to the recent removal of the "Isle of Man KKK" page, created by residents of the island off the coast of England.

Facebook interpreted the page's advocacy of "cleansing the island of foreigners" as threatening and inciting violence, he said.

Facebook receives lots of reports about such pages and actively polices the site, Schnitt said. Last year Facebook removed several pages posted by Italian neo-Nazis after complaints that they encouraged violence against gypsies.

Brian Cuban, who is of Russian Jewish descent, has written about his fight to have the Holocaust-denial pages removed on his site, The Cuban Revolution.

He said he contacted Facebook after a conversation with a friend who runs the Jewish Internet Defense Force, a group that monitors and tries to eradicate anti-Semitic online content.

The Jewish Internet Defense Force, which was successful in removing a Facebook page for the group "Israel Is Not A Country! Delist It From Facebook As A Country," is outspoken in its own right and sometimes guilty of sweeping generalizations of its own.

In an article on Brian Cuban's site published during the 2008 presidential campaign, a representative from the Jewish Internet Defense Force was quoted as saying that "99.9 percent of Muslims hate us."

The article went on to quote JIDF spokesman on the last Presidential campaign: "We hope to continue to highlight the issues surrounding [then-candidate Barack Obama's] terrorist connections as well as his racist and anti-Semitic church, which has supported Hamas and the Rev. Louis Farrakhan."

A Jewish Internet Defense Force spokesperson named David, who requested his last name be withheld because his group has received death threats, said Thursday he would rather people not focus on those specific quotes for several reasons, including the fact that it was an "informal interview" and Cuban "would not let us correct any of our statements after we quickly answered him to help him meet his deadline."

But on the matter of Facebook and Holocaust deniers, the Jewish Internet Defense Force has a clear stance.

"Facebook should not provide a platform for hatred, especially as it is against their TOS [terms of service]," David said. "Holocaust denial is illegal in 13 countries and represents a form of Jew hatred and hate speech in general."

Deborah Lipstadt is the Dorot Professor of Modern Jewish and Holocaust Studies at Emory University and an expert on Holocaust denial. She said social-networking sites like Facebook are attractive to deniers.

"It allows people to find one another, both for good and for bad," she said. "People who are drawn to Holocaust denial tend to be fringe kind of people who might not otherwise be able to find a group, but this way they can find other like-minded people."

Deborah Lauter, director of Civil Rights for the Anti-Defamation League, said the issue of anti-Semitism and hate speech online is a growing one, partly because of the anonymity the Web offers.

Lauter pointed out that Facebook's Statement of Rights and Responsibilities says that users "will not post content that is hateful, threatening, pornographic, or that contains nudity or graphic or gratuitous violence."

She said the Anti-Defamation League has worked with sites such as YouTube and MySpace to encourage them to be "socially responsible corporate citizens."

"Even though in the States this kind of hate is protected speech, [Web sites] don't have to provide the forum to help spread it," said Lauter, whose organization is the U.S. representative for the International Network Against CyberHate. "Our position is that if you are going to be providing it, then you have to step up and put in the mechanism for policing it."